What is Cash ratio?

The cash ratio or cash coverage ratio is an important liquidity ratio which is closely related to Quick Ratio and Current Ratio.

Analyzing cash ratio helps in identifying the liquidity position of the company purely in terms of cash and cash equivalents.

Cash Ratio tries to build a relationship between cash available with the company and the overall current liabilities.

It shows how much Cash does the company has as against its Current Liabilities.

Hence, the Cash coverage ratio indicates the company’s ability to pay off its current liabilities using only cash.

Unlike Quick ratio and Current Ratio, Cash coverage ratio is considered as even more stringent liquidity measure since it considers only cash and cash equivalent to pay off the current liabilities.

Now, let us look understand the formula in depth. 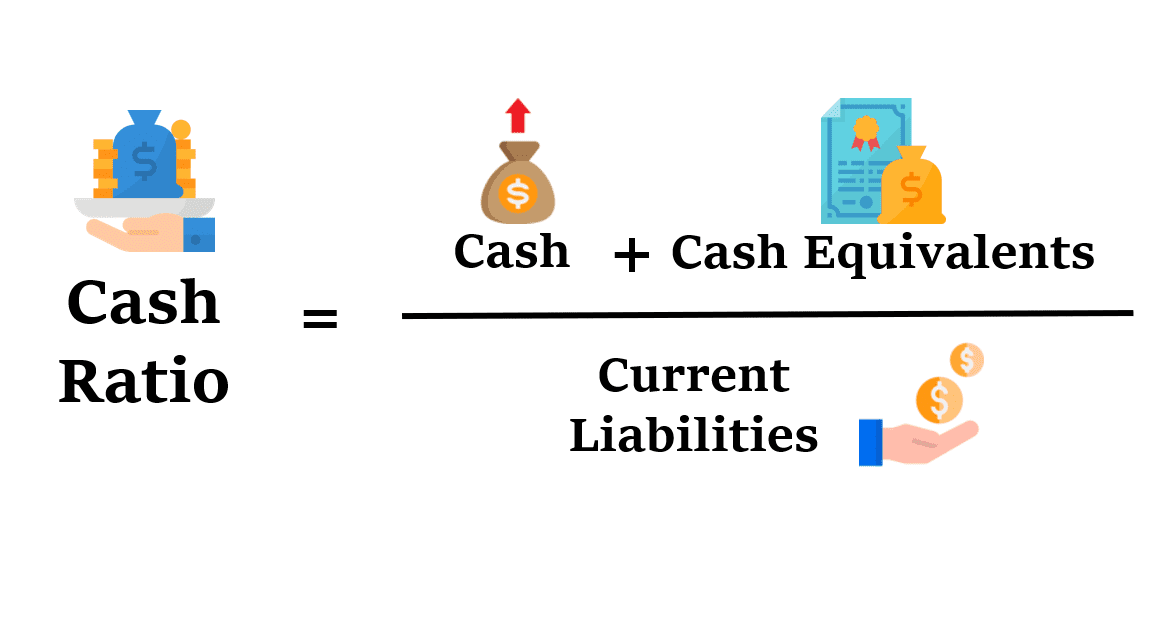 The formula is closely related to other liquidity ratios.

We take Cash and Cash equivalent in the numerator and Current Liabilities in the denominator.

Below are the few important consideration for calculating the numerator and denominator.

Let us quickly look at how this ratio is related to the Quick ratio.

The formula for Quick ratio is as given below

Now, look at the formula for the Cash ratio.

As you can compare, in the formula of Cash ratio, Receivable balances are not considered in the numerator.

But, when we calculate Quick Ratio, they are considered.

Below is a small comparison that highlights which Current Assets need to be excluded from the numerator while calculating Quick Ratio and Cash Ratio. 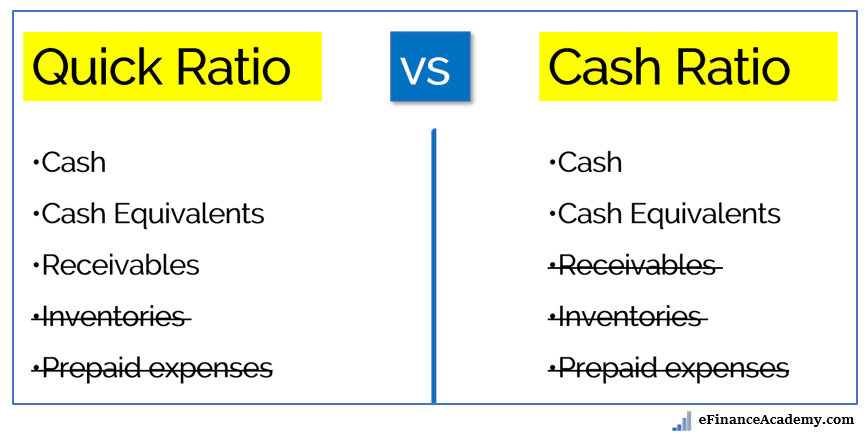 Now that we have understood the difference & relation with Quick ratio, let us look at few examples.

This example is taken from the current ratio resource.

Consider the below given two hypothetical companies – Company A and Company B.

The given values are in $million. 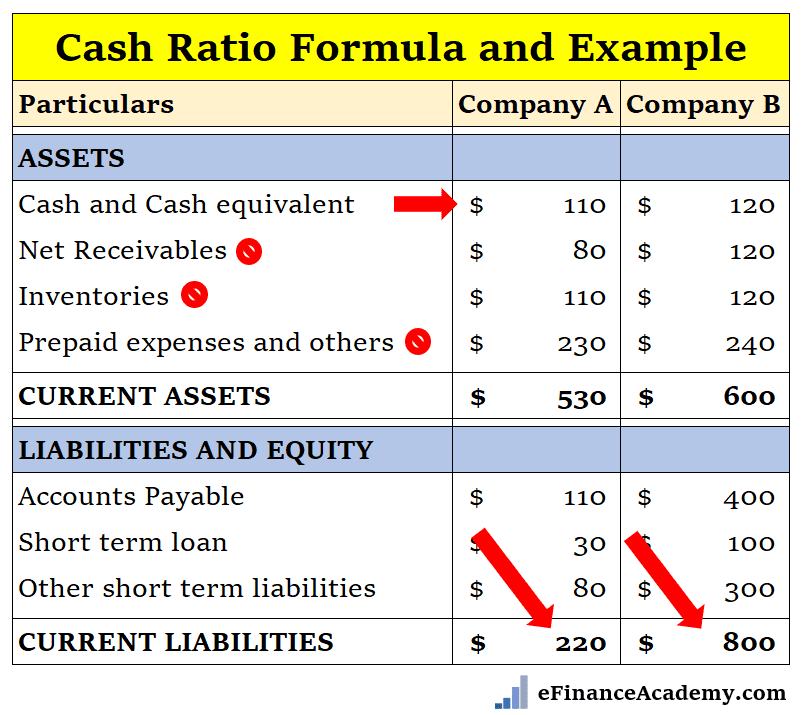 To calculate the Cash Coverage ratio we need,

Both the values can be obtained from the above-given Balance Sheet extract.

Now, we can use the above values to calculate the ratio.

The ratio for Company A is 0.5 times.

What this means is that for each dollar of current liability, Company A has only $0.5 worth of cash and cash equivalent.

On the contrary, Company B has $0.14 worth of cash and cash equivalent as against each dollar of current liabilities.

Compared to both the companies, Company A tends to have a higher liquidity position since it’s Cash ratio is greater than Company B.

Ideally, it is preferred to have a coverage ratio which is greater than 1. This will indicate that the company’s cash balance is sufficient to pay off its current liabilities.

But, in our example, both the companies have a coverage ratio which is less than 1.

We need to compare this ratio with the industry benchmark and understand if such a low ratio is only company-specific or it is seen in other companies as well.

Hence, a conclusion should be drawn only after detailed peer comparison.

To understand the practical application of the ratio, let us consider the Financial Statements of Walmart and calculate the cash ratio using excel.

You can download the Cash ratio template using the below option.

Once you download, you will see the consolidated Balance Sheet of Walmart and related calculations using excel. 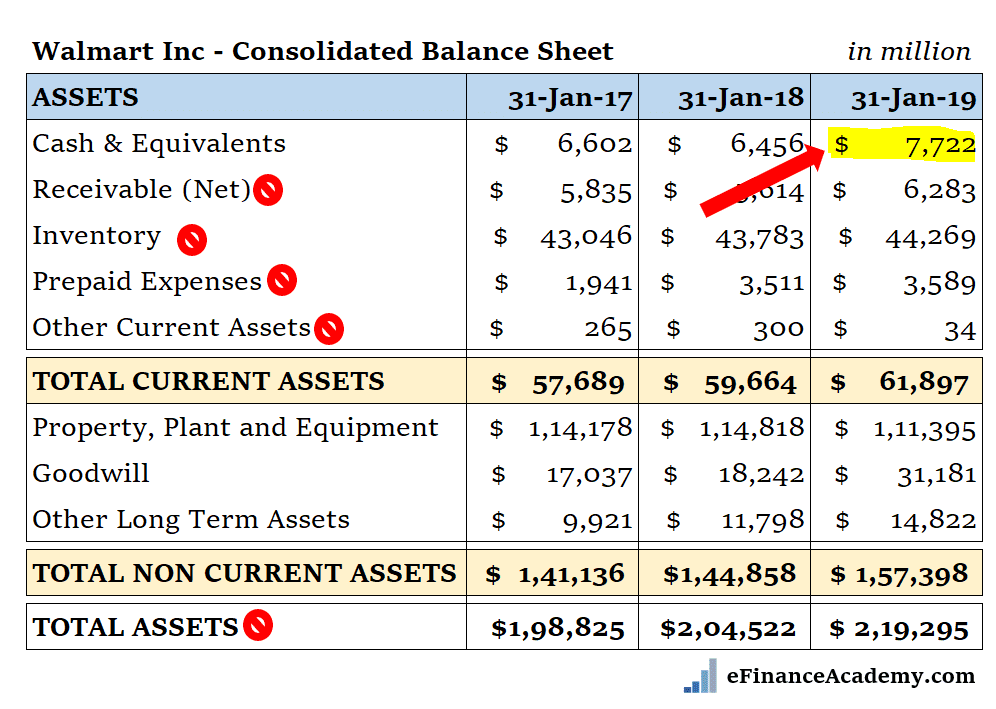 To calculate the coverage ratio, we need to exclude few current assets like Receivables, Inventory, Prepaid Expenses, etc and consider only cash and cash equivalent.

Similarly, from the Balance extract of Liabilities and Equity section, we can calculate Total Current Liabilities for Walmart. 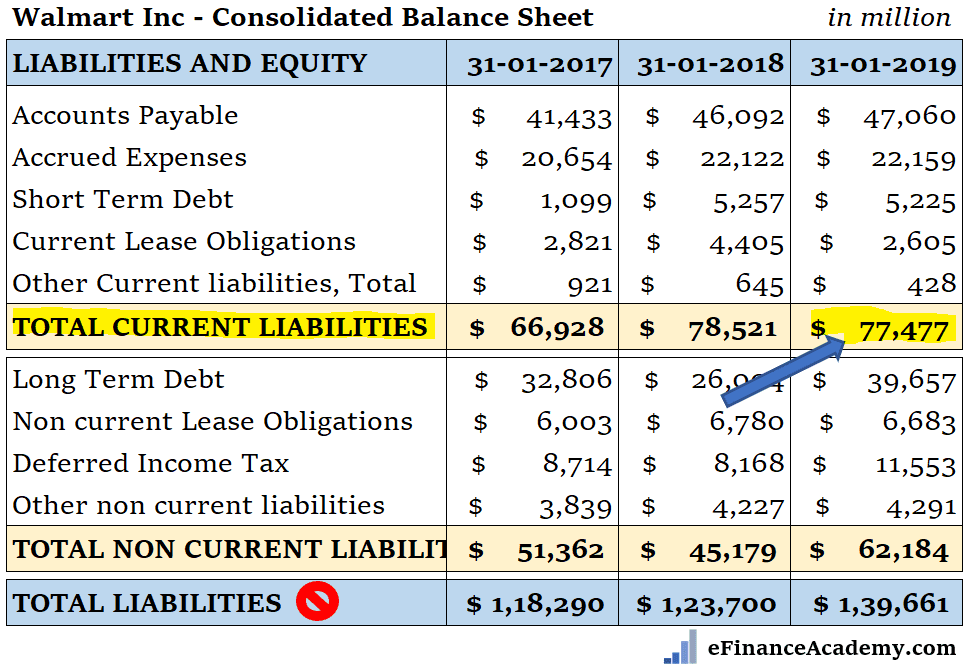 Now that we know all the values, let us calculate the ratio for Walmart. 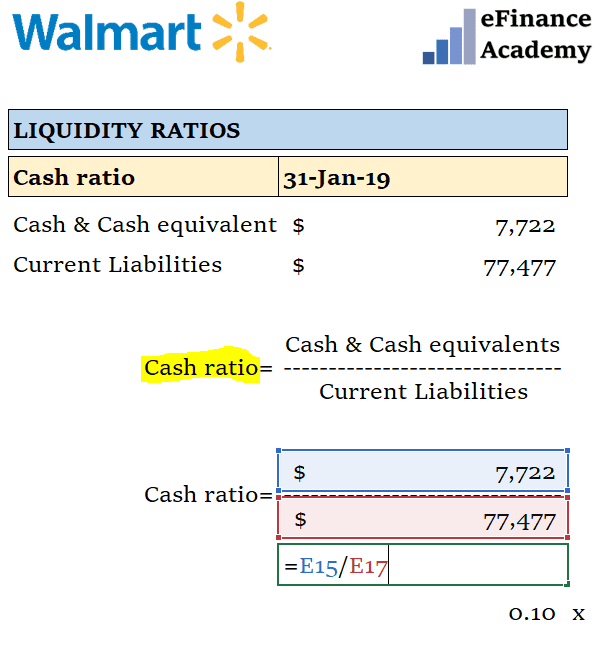 What this means is that for each dollar of Current liabilities, Walmart has only $0.1 worth of Cash and Cash equivalents.

Ideally, it is preferred to have a cash ratio that is more than 1.

Instead of concluding on a standalone basis, the ratio has to be compared with other companies in a similar sector.

This helps in understanding if such a low cash ratio is a company-specific issue or it is an industry-wide phenomenon.

As already highlighted, the ratio indicates how much cash and cash equivalent does the company have as against its overall current liabilities.

Another important way of interpreting financial ratios is by performing a Trend Analysis.

Trend Analysis refers to plotting the historical financial ratios to see how the ratio has moved over time.

It helps in understanding if the financial performance of the company is sustainable in the near future.

In this resource let us look at how the Coverage ratio profile has changed for Facebook. 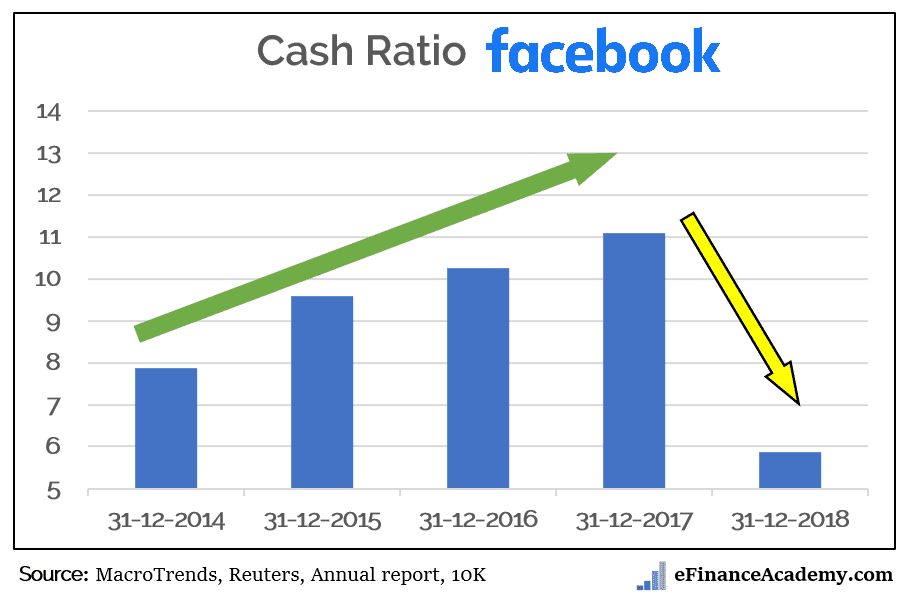 Facebook generates a significant amount of cash as part of its business and tries to maintain low Current liabilities.

As evident from the chart above,  the cash ratio for the company has been increasing for the past few years. It even increased to a level of almost 11 times back in 2017.

This shows not only the efficient management of current liabilities but also the ability of the company to generate cash continuously.

Now, for the year ending 31st December 2018, the growth in cash balance was lower than that of current liabilities. Hence there is a drastic fall in the ratio.

Hence, with the help of trend analysis, we can identify any volatility in the financial ratios and try to understand its impact in the near future.

Similar to performing trend analysis, it is also important to understand how different is the ratio when compared to other companies.

Such a comparison with similar companies helps in understanding where is the company placed among its peers. 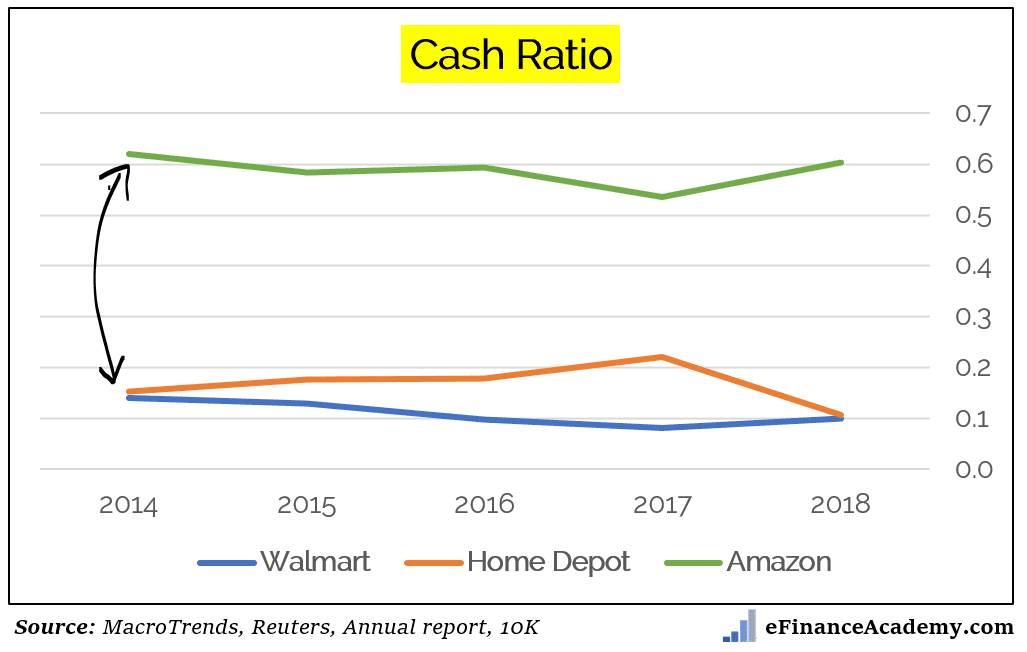 As we compare the coverage ratio for companies in the Retail Sector, we can clearly see that they are in lower decimals.

Generally, the companies in the retail sector have a tight working capital requirement.

This is applicable to Walmart as well.

The company is unable to increase it’s cash and cash equivalent balance against its current liabilities.

For the year ending 31st December 2018, Walmart cash ratio is 0.1 times which is almost similar compared to the previous period.

As we look at Home Depot, the scenario is no different.

Even Home Depot operates with a tight working capital environment.

The company was able to increase its ratio marginally from 2014 to 2017.

But, as evident from the chart above, the ratio has fallen back to its earlier levels.

Now, for the year ending 31st December 2018, Home Depot Cash ratio is 0.1 times which is almost similar to that of Walmart.

When compared to companies like Walmart and Home Depot, Amazon clearly has a higher coverage ratio.

Although the ratio is not greater than 1, the company is able to manage its Current liabilities and Cash balance efficiently such that the ratio is steady in the range of 0.5 to 0.7 times.

Apart from companies in the Retail sector, let us now understand how different is the ratio in the case of Tech-based companies.

Hence, they have a significant amount of cash and other current assets on their Balance Sheets to meet current liabilities.

As evident from the chart below unlike other companies whose values are in decimals, Tech-based companies’ have a coverage ratio that is relatively higher. 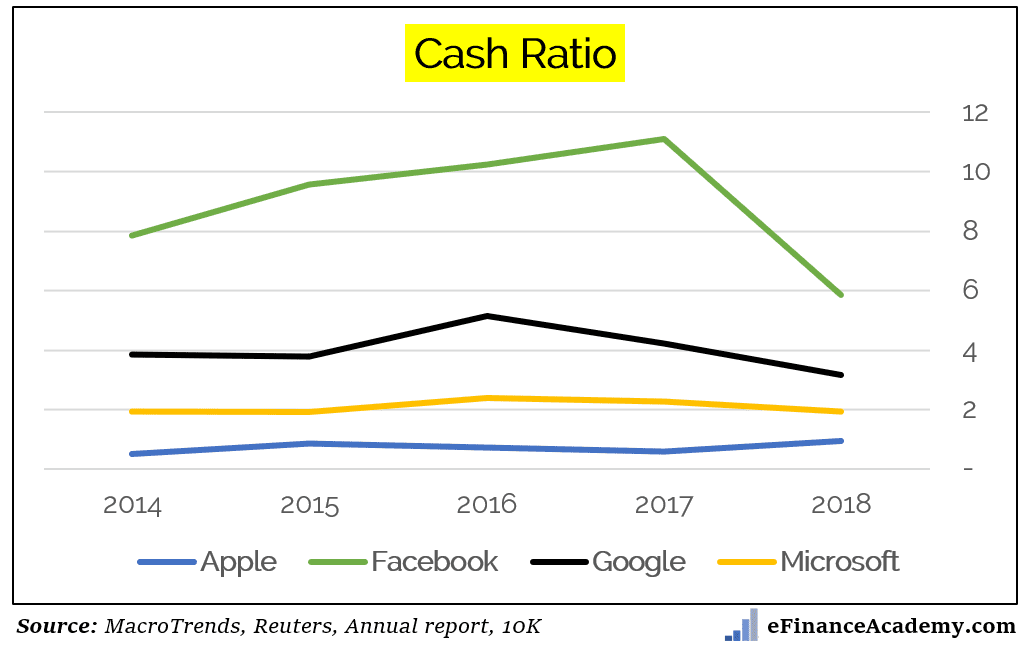 Apple is known for maintaining a huge cash balance on its Balance Sheet.

For the year ending 28th September 2019, the company had, approximately $36,600 million worth Cash and cash equivalents.

But, as we look at the coverage ratio for the company, it is less than 1.

Subsequently, the company was able to manage its Current liabilities in a better manner and increases Cash balance.

As a result of which the ratio increased to 0.7 times.

Although the value is still less than 1, the company is continuously generating significant Cash every year. This is a great indication of improving liquidity position.

Currently, for the year ending 28 September 2019, Apple cash ratio is 0.95 times compared to 0.57 times for the previous period.

We have seen the coverage ratio profile for Facebook as part of Trend analysis above.

The company was able to generate a significant amount of cash and cash equivalents relative to its current liabilities. This helped the company in improving its overall liquidity position.

Currently, for the year ending 31st December 2018, Facebook Cash ratio is 5.9 times compared to 11 times for the previous period.

As we look at the coverage ratio profile for Google, volatility in the ratio is clearly evident.

The company is trying to improve its cash coverage ratio yet the fluctuations in current liability is posing a challenge in increasing the ratio.

Nonetheless, the company has maintained a ratio that is greater than 1.

For the year ending 31st December 2018, Google cash ratio is 3 times compared to 4.2 times for the previous period.

Similar to Apple, even Microsoft is unable to increase its ratio for the past 5 years.

The ratio is stagnant in the range of 1.8 to 2 times

Scroll through below recommended resources or learn other important Liquidity ratios.