What is the Debt to Asset ratio? 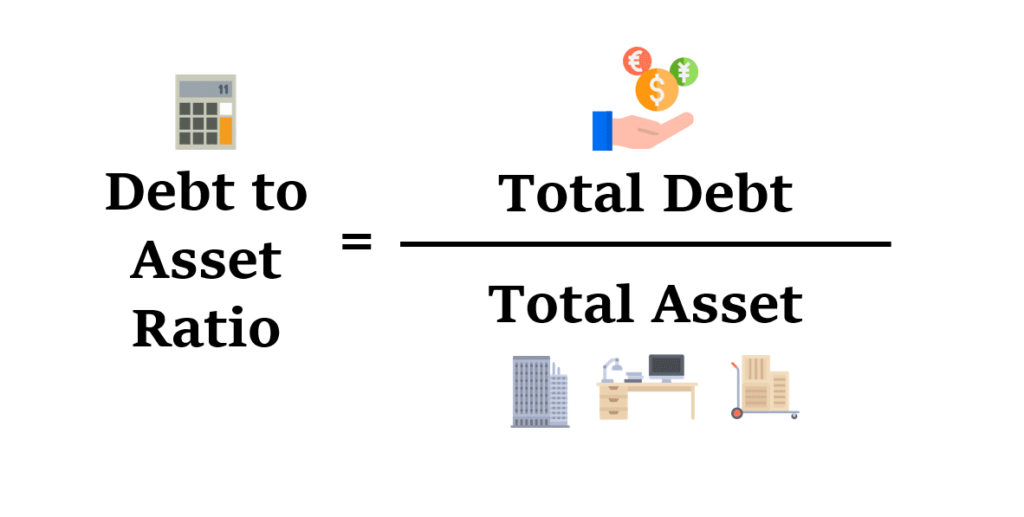 Similarly below are the most important items that are considered as Debt.

Let us now look at how to apply this formula with an example.
As part of this resource, we have continued our example which we discussed as part of Debt to Capital Ratio.
Consider the two companies – Alpha Inc. and Beta Inc.
We are given the Balance Sheet extract for both the companies. 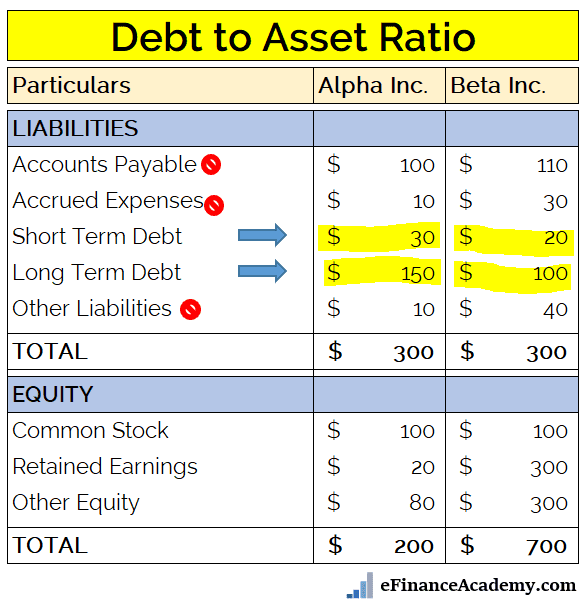 To calculate the Debt ratio, we need

Both the value in the case of the above companies can be obtained from the Balance Sheet.
Total Debt
In our given example, companies have only two types of Debt, Short term debt and Long term debt.
Let us add both the value and arrive at Total Debt

Total Assets
Similar to Total Debt, even Total Assets can be obtained easily.
All we need to do is take the total of Total Asset value from the Balance Sheet. 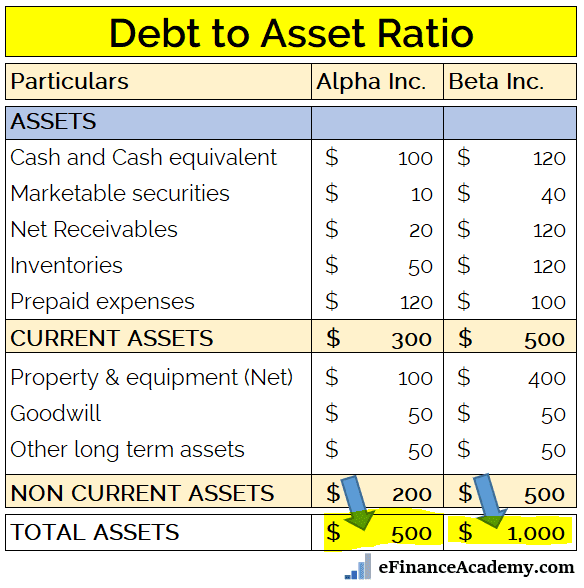 Now that we have both the values, we can calculate the ratio.
Debt to Asset Ratio = Total Debt /Total Assets

As evident from the calculations above, the Debt  ratio for Alpha Inc. is 0.36x while its 0.12x for Beta Inc.
What this indicates is that in the case of Alpha Inc.,36% of Total Assets are funded via Debt.
On the contrary, in the case of Beta Inc., only 12% of Total Assets are funded via Debt.
Clearly, among both, Alpha Inc has high Debt on its Balance Sheet.  This may put an Interest burden on the Company.
Since Beta Inc, has a low DA ratio, it enjoys greater flexibility to fund its Assets via Debt, if required.

In our next example, let us calculate the Debt to Asset ratio using Excel.

You can download the Debt to Asset ratio template using the below option.

After you download you will see the consolidated Balance Sheet of Walmart and related calculations. 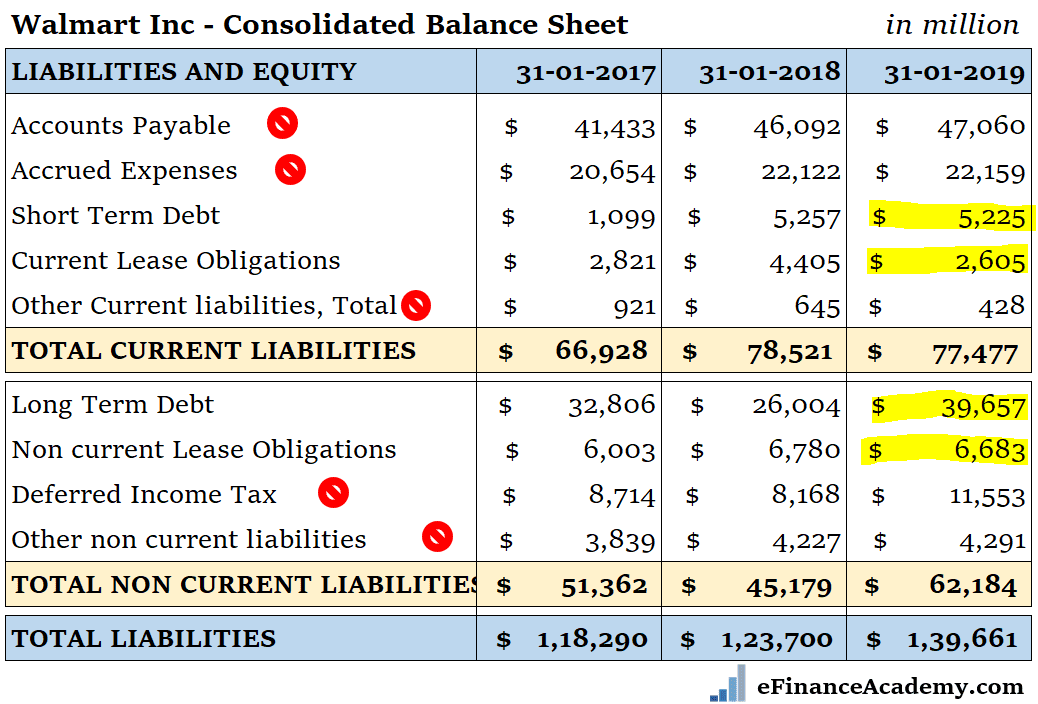 Let us calculate each item and understand the example better.
Total Debt
As you can see from the Balance Sheet above, Walmart has below liabilities that form part of Total Debt.
Let us add all such items and arrive at Total Debt.

Total Assets
Unlike the numerator,  we can calculate the denominator quite easily.
Total Assets can be obtained from the Balance Sheet directly. 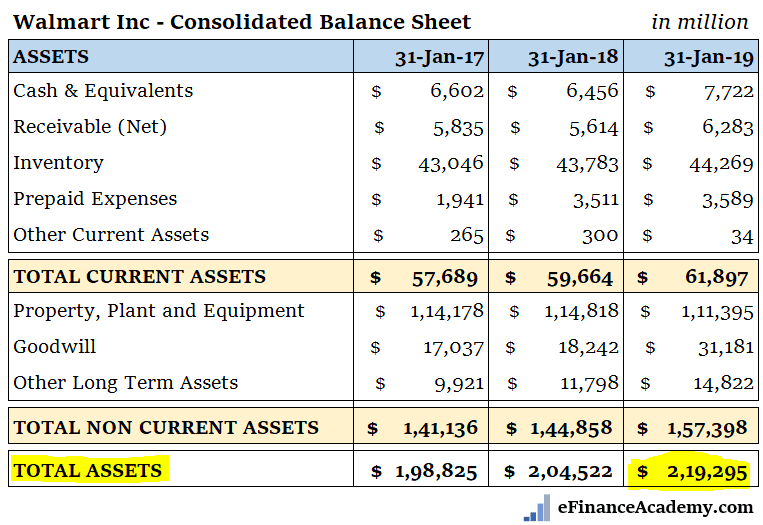 In the case of Walmart,
Total Assets = $219,295
Now that we know the numerator and denominator, we can easily arrive at the ratio. 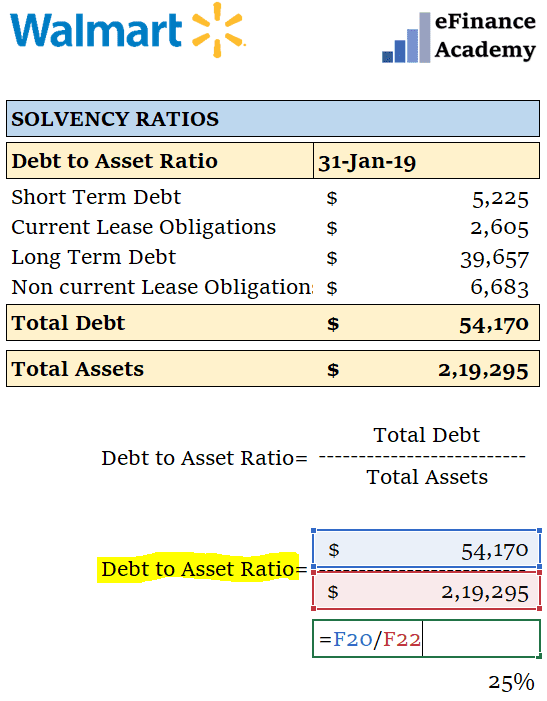 What this indicates is around 25% of the Total Assets of the company are funded via Debt.

To know if this ratio is good or bad, we need to understand how is the ratio profile for the industry as a whole. Also, we need to look at how the ratio has changed historically.

Has already discussed, Debt ratio indicates how much of the company’s Assets are funded via Debt.
Let us look at hoe to interpret if this ratio is very high or low.

As already highlighted, to understand if the ratio is good or bad, we need to look at how the ratio has moved historically.
Let us look at the case Home Depot, a US-based Home Improvement Retailer.
Below is the Debt ratio profile for the company for the past 5 years. 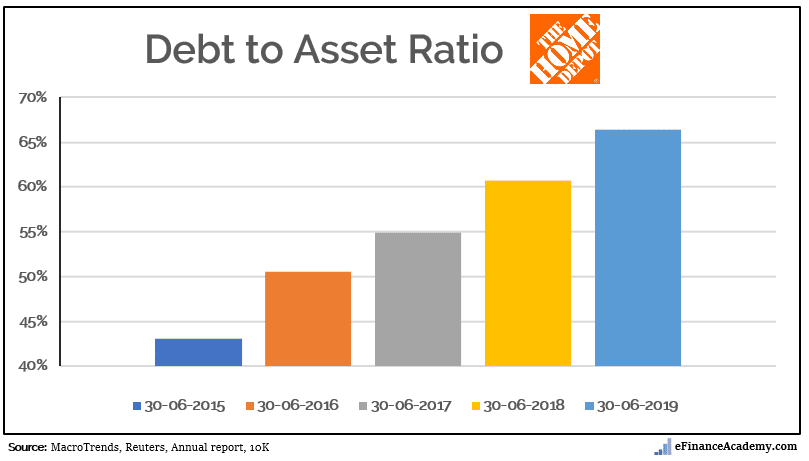 As evident from the chart above, the ratio has been increasing significantly.
Back in 2015, the Debt to Asset ratio for Home Depot was almost 42%.
Subsequently, most of the company’s asset was funded via Debt. Hence, the ratio gradually increased.
The company may have access to low-cost Debt. Hence the Debt level relative to the overall asset as increased over the period.
Clearly, the company’s strategy is to raise Debt to fund its Assets.
For the year ending 30th June 2019, Home Depot Debt ratio was almost 67%
Hence, performing a historical trend analysis not only helps us in understanding how the ratio as moved, but also the overall company strategy.

Apart from performing the trend analysis, one should also look at how the ratio is different for companies in a similar or different sector.
In this resource, let us look at the Debt ratio profile for prominent companies and understand how different they are when compared to one another. 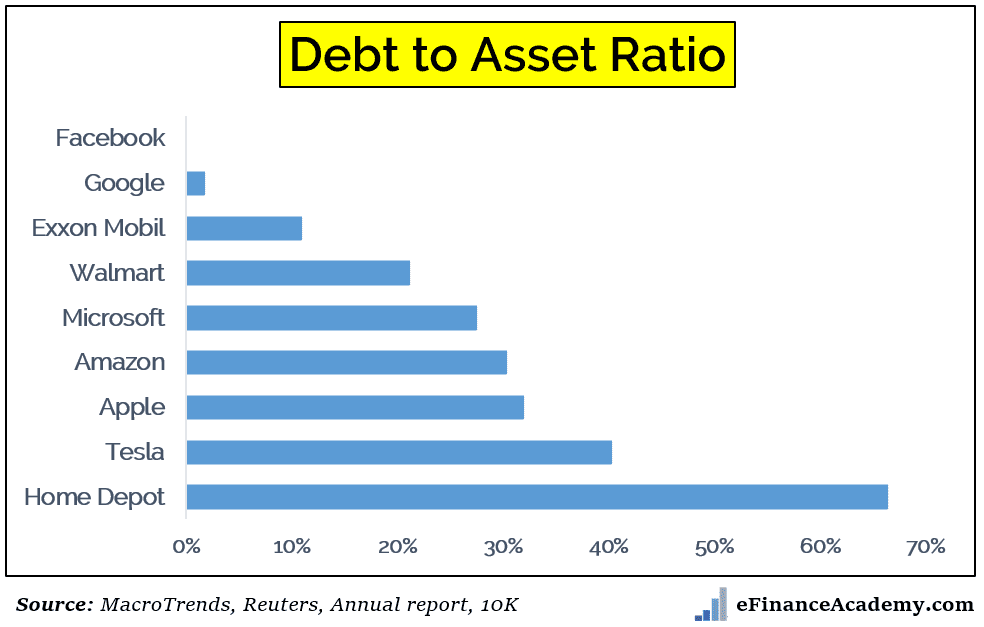 As evident from the chart above, clearly Internet-based companies like Facebook and Google have a low Debt to Asset ratio. This is in line with what we have seen in the Debt to Capital ratio as well.
Generally, these companies are not capital intensive. They fund most of their assets via Equity Capital.
Facebook almost has no Debt on its Balance Sheet.
Google has a very nominal Debt. Hence, Google Debt to Asset ratio is 2%.

As already seen in the example above, Walmart has a Debt to Asset ratio of almost 25%.
On the contrary, the Home Improvement retail company, Home Depot has the highest Debt ratio of almost 66%
This clearly shows the different strategies applied by both companies.
As we look at the profile for Amazon, the ratio is not significantly high.
The Debt to Asset ratio for Amazon is moderate at 30%.

In the case of US-based Electronic Vehicle maker Tesla, the ratio is relatively higher.
Unlike other companies, Tesla has a very troublesome Balance Sheet and suffers losses.
The Debt to Asset ratio for Tesla is almost 40%

Clearly, among all the companies under the discussion, Tesla and Home Depot tends to have a high Debt to Asset ratio. This can be attributed to various other factors apart from the above mentioned ones.

So that was everything you need to know about Debt to Asset ratio.
Learn other important Solvency Ratios or browse through the below recommended resources.

2 thoughts on “Debt to Asset Ratio”