What is the Debt to Capital ratio?

While analyzing a company’s Capital Structure, Solvency Ratios are most widely used.

Debt to Capital ratio is one such Solvency ratio.

This ratio is most often used by Investors and Lenders to evaluate if the company is overburdened with Debt.

As part of the Capital Structure, a Company may have Debt Capital and/or Equity Capital.

Debt Capital refers to the money borrowed by the Company from the lenders to run the business.

Equity Capital refers to the money given by the Equity Shareholders, the owners of the company.

Now, Debt to Capital ratio basically shows how much of the company’s Capital is funded by Debt Capital.

It helps in understanding if the company has taken significant Debt such that it is overburdened to meet Interest Expense.

Let us look at the formula and a few examples to understand the ratio better.

The formula for the debt to Capital ratio is quite simple.

We take Total Debt in the numerator and Total Capital in the denominator.

Below are the important considerations while calculating the numerator and denominator.

Having understood the formula, let us quickly look at a few examples to apply the same.

As part of the example, let us consider two Companies- Alpha Inc. and Beta Inc.

Below given is the Balance Sheet extract of both the companies.

To calculate the Debt to Capital ratio, we need

Both the values can be obtained from the Balance Sheet given above.

Let us calculate one by one.

The components of Equity Capital, in the case of Alpa Inc. and Beta Inc. are

Adding all the components, we get the Equity Capital value of

We have already seen that,

Now, we can calculate Debt to Capital Ratio for both the companies.

What this indicates is that in the case of Alpha Inc. the company has around 37 % of its capital in the form of Debt while Beta Inc. has only 15% of its Capital via Debt.

Among both, Alpha Inc. has a significant Debt to Capital ratio.

This indicates that the company has a relatively higher Debt on its Balance Sheet.

Now, the company needs to meet its interest expense on its Debt Capital.

Since the company has high Debt, its Operating profit will be eaten away by high Interest expenses.

But, in the case of Beta Inc., the company has relatively lower Debt.

Hence, the company can earn better Operating profits that can be translated into pretax profit.

We will look at a detailed interpretation of the ratio in a later stage.

As part of the practical application, let us look at how to calculate the ratio using Excel.

In this example, we will consider the Financial Statement of Walmart.

Download the Debt to Capital template from the Marketplace

After download, you will receive the Consolidated Balance Sheet of Walmart along with related calculations.

As already highlighted, to calculate the ratio we need,

Total Debt can be calculated from the below Balance Sheet extract. 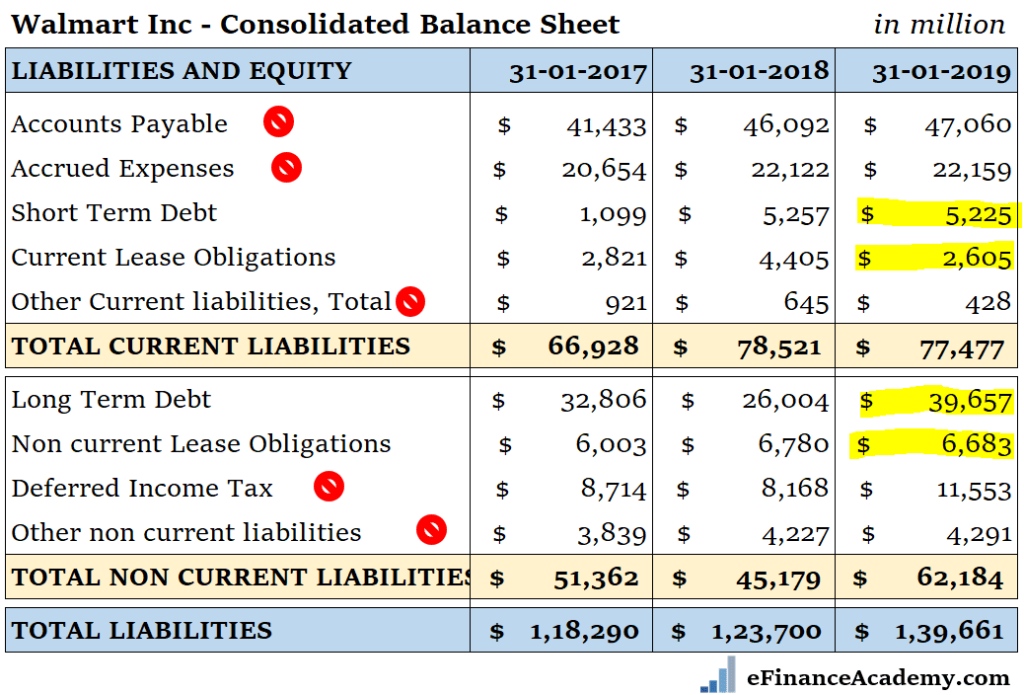 In the case of Walmart, the company has below items that form part of Debt.

We need to consider both Total Debt and Total Equity.

In the case of Walmart, components of Equity are as below.

Since we have all the values, we are now in the position to calculate the ratio for Walmart. 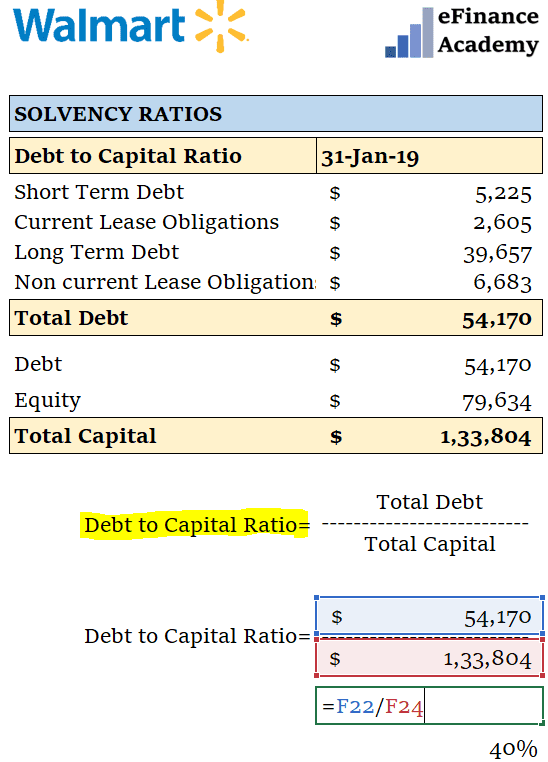 As evident, Walmart has 40% of its Capital funded via Debt.

Instead of concluding on a standalone basis, We need to look at how the Capital Structure has changed over the period.

This will help in analyzing the company better.

As already mentioned, the Debt to Capital ratio basically highlights the percentage of the company’s capital funded via Debt.

Let us look at how to interpret this ratio.

As already highlighted, to analyze the company better, we need to look at how the ratio has moved over the periods.

This will help in understanding the change in Capital structure and the Company’s strategy towards raising Capital.

Let us understand how the Capital structure of Apple has changed over the period.

Consider the below-given chart that shows the ratio profile for the past 5 years. 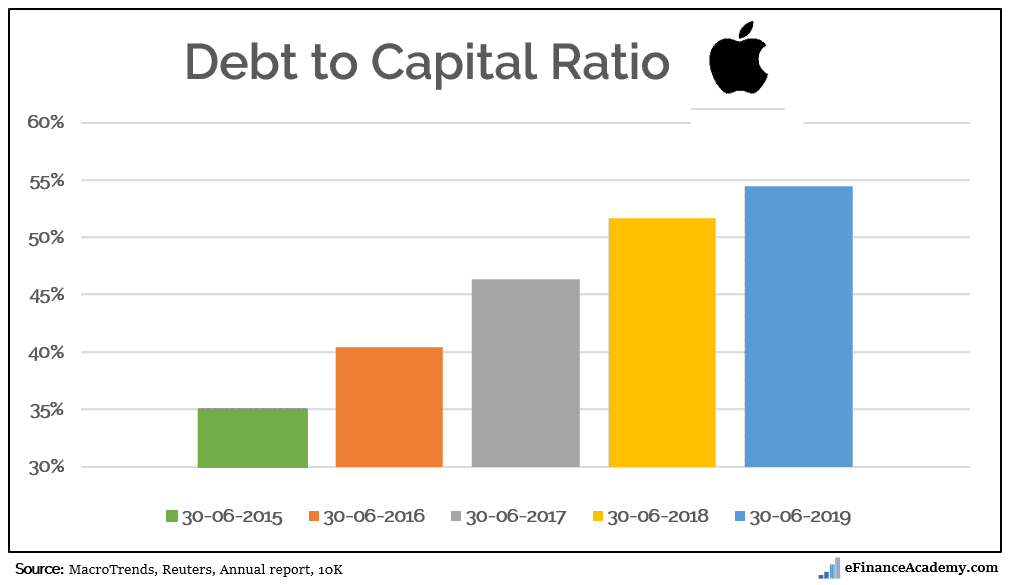 As evident from the chart above, back in 2015, the company had only 35% of its Capital funded via Debt.

But, subsequently, the share of Debt in the overall capital Increased significantly.

So, the company has raised the additional capital via Debt that made the ratio Increase

Also, it is important to understand that raising additional funds via debt should not be concluded as a bad strategy.

If a company is earning sufficient return which is greater than the Cost of Debt,  then raising additional capital in the form of Debt is more beneficial for the company.

This may be relevant in the case of Apple.

Since the company earns a return which is greater than the Cost of Debt, the company prefers raising additional funds via Debt rather than Equity.

Hence, analyzing the historical ratio helps us in understanding the company strategy around its capital structure.

In this section, let us quickly look at the ratio profile for prominent companies.

This will help us understand how different the ratios are when compared to one another. 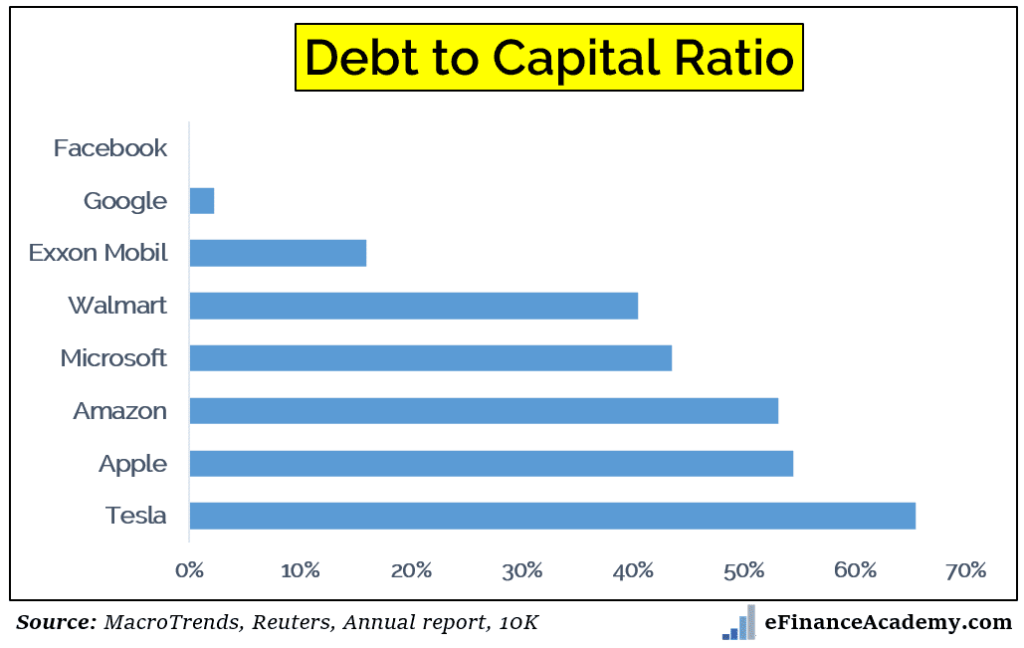 As evident from the chart above, internet-based companies like Facebook and Google have a very nominal Debt on their Balance Sheet. Most of their Capital is in the form of Equity.

Hence, the Debt to Capital ratio for both these companies is very low.

In the case of Facebook, the company does not have any Debt. Hence, the Debt to Capital ratio would not be relevant here.

In the case of Google, the company has very nominal that the Debt to Capital ratio for Google is as low as 2%

Let us look at the ratio profile for ExxonMobil-US based Oil & Gas company.

Even this company does not have any significant Debt on its Balance Sheet.

ExxonMobil Debt to Capital ratio is around 16%

As already discussed as part of the example above, Walmart has around 40% of its capital funded via Debt.

To understand if this is a Good Debt to Capital ratio or note, we to look at how the Capital Structure has changed over the period. Similar to what we did for Apple (Refer this)

Similar to Walmart, Microsoft has a ratio which is around 45%.

Hence, the company has a Debt to Capital ratio which is higher than companies like Google and Facebook.

Let us look at another Internet-based company- Amazon.

As part of its expansion strategy, the company requires significant Additional Capital periodically.

Currently, the Debt to Capital ratio for Amazon is 53%.

The premium smartphone maker Apple also has considerable Debt on its Balance Sheet.

As already seen as part of the Trend Analysis, the company’s strategy has been raising additional Capital in the form of Debt.

Hence, clearly the ratio has significantly shot up over the period.

Currently, the Debt to Capital ratio for Apple is 54%.

When we compare other companies in the chart above, clearly Tesla has the Highest Debt to Capital ratio.

The company has been suffering losses for many years depleting the capital rapidly.

Since the company has been making losses, the Equity value on the Balance Sheet relative to the Debt Capital has decreased significantly.

Hence, the Debt to Capital ratio for Tesla is as high as 65%.

Although the ratio is significantly high, Investors and lenders are optimistic about the companies future prospects. Hence they are ready to fund the company constantly.

So that was everything we need to know about the Debt to Capital ratio as part of Liquidity Ratios.

Learn other relevant ratios or browse through the below recommended resources.