What is Fixed asset turnover ratio?

As part of Financial Ratio Analysis, activity ratios help in understanding the efficiency with which a company utilizes its resources.

Similarly, an important activity ratio that measures the efficiency of the company in utilizing the assets as part of operations is – Fixed asset turnover ratio

The Fixed asset turnover ratio is an activity ratio that helps in understanding the efficiency of the company in generating the revenue from its fixed assets.  It indicates if the company is utilizing the fixed assets more efficiently or not.

As the name suggests, the ratio calculates the amount of revenue generated from each dollar of Fixed assets employed by the company.

It tries to build a relationship between the Fixed asset and the Revenue that the company generates. 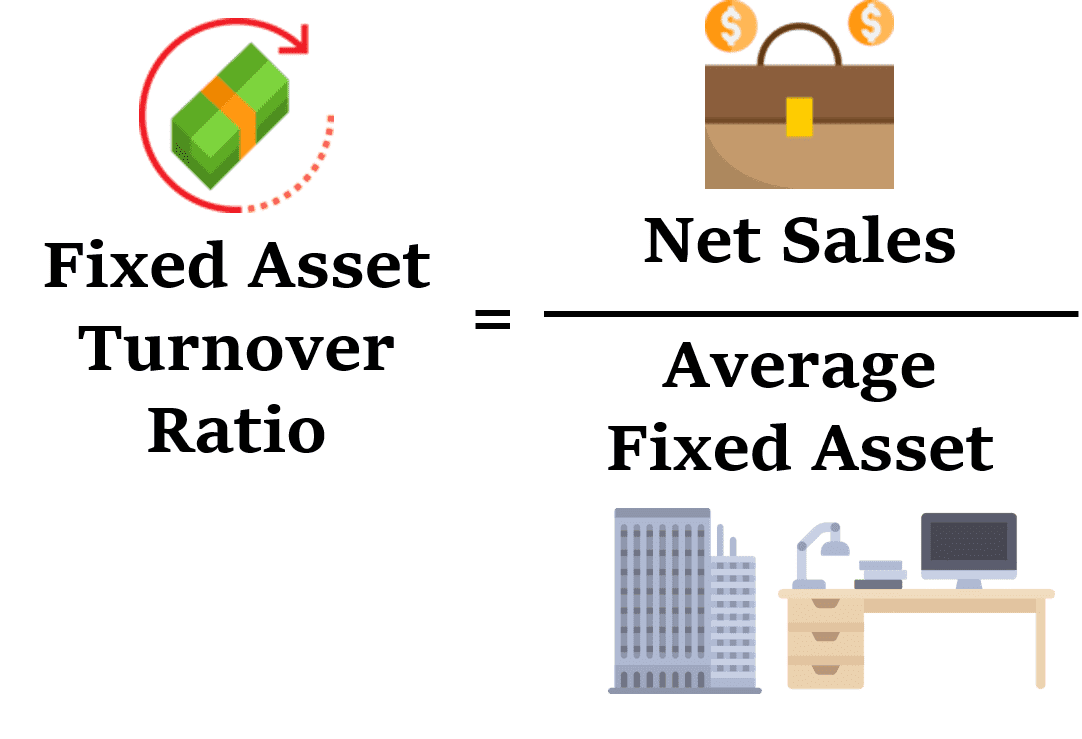 We take Net Sales in the numerator and Average Fixes assets in the denominator.

Net Sales can be easily obtained from the company’s income statement. It is nothing but the revenue company generates after reducing sales returns, if any.

Average Fixed assets can be calculated from the company’s balance sheet. We take a simple average of total assets as at the current period-end and previous period-end.

Let us understand the ratio with a hypothetical example. 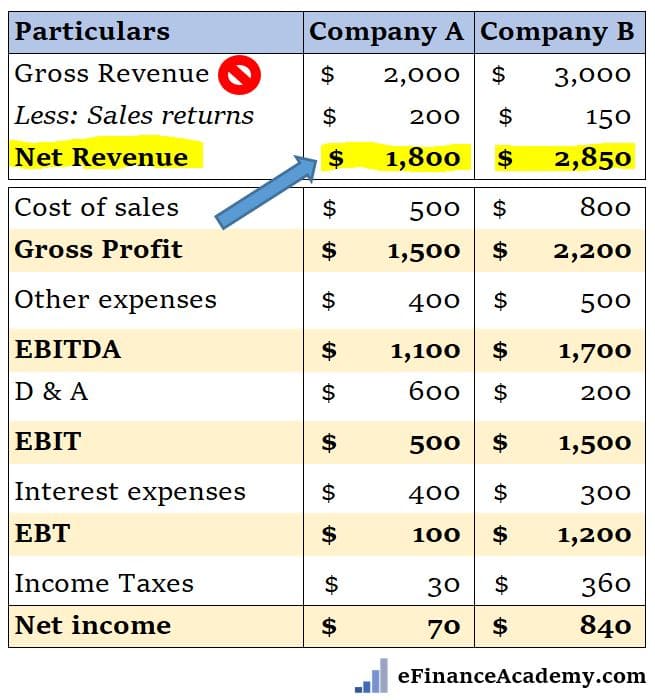 Let us Net sales for both the companies 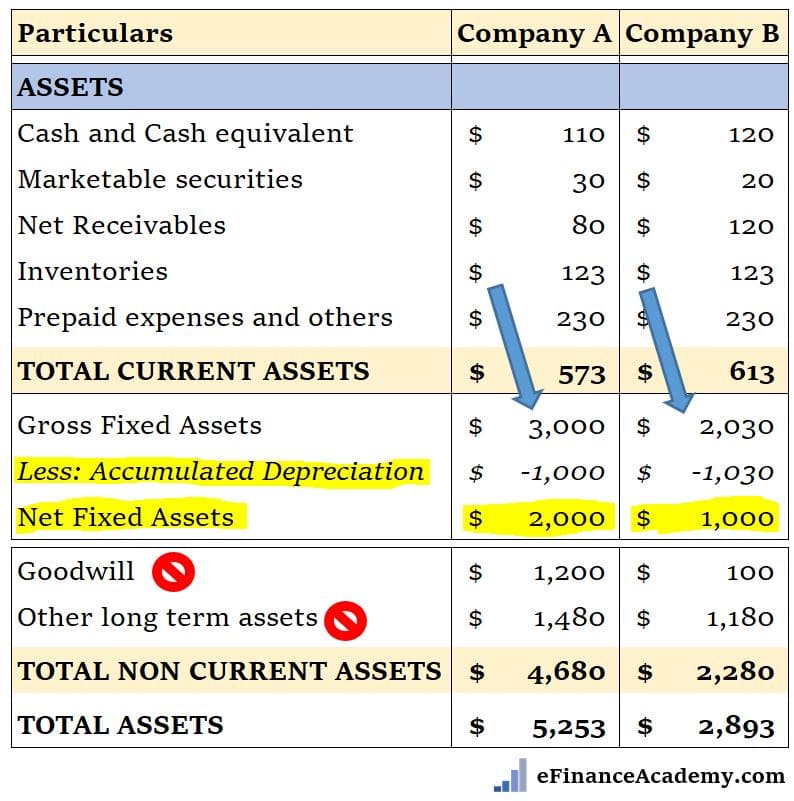 Let us calculate Average Fixed assets for both the companies.

What this means is that Company A is not managing its Fixed Assets efficiently.

Hence, per each dollar of Fixed Asset, it is able to generate only $0.9 Revenue.

On the other hand, Company B is relatively more efficient since it is generating $2.8 per each dollar of Fixed Asset.

In our next example, let us calculate the Fixed Asset turnover ratio using excel.

You can download the template for Walmart using the below option. 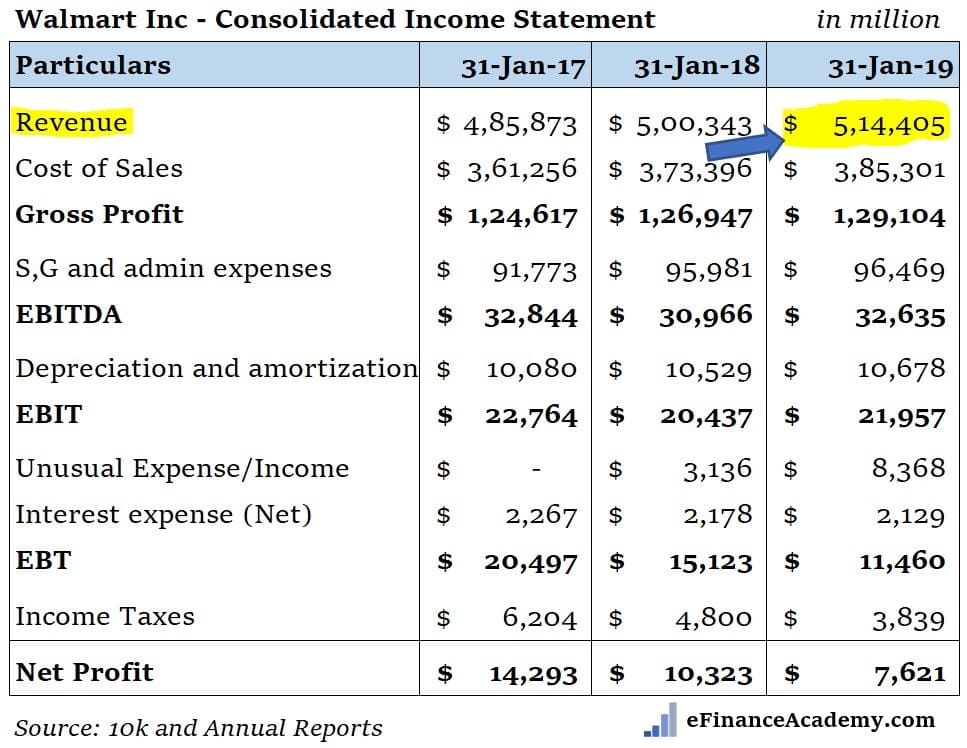 The Sales value given in the income statement is after reducing sales return, if any. 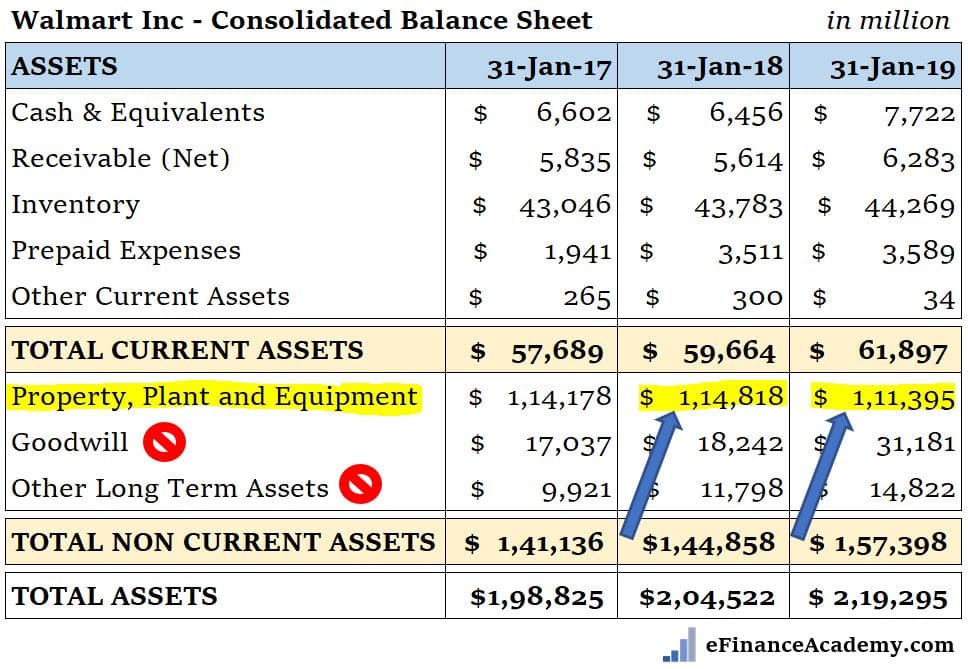 Now that we have all the values, let us calculate asset turnover ratio for Walmart. 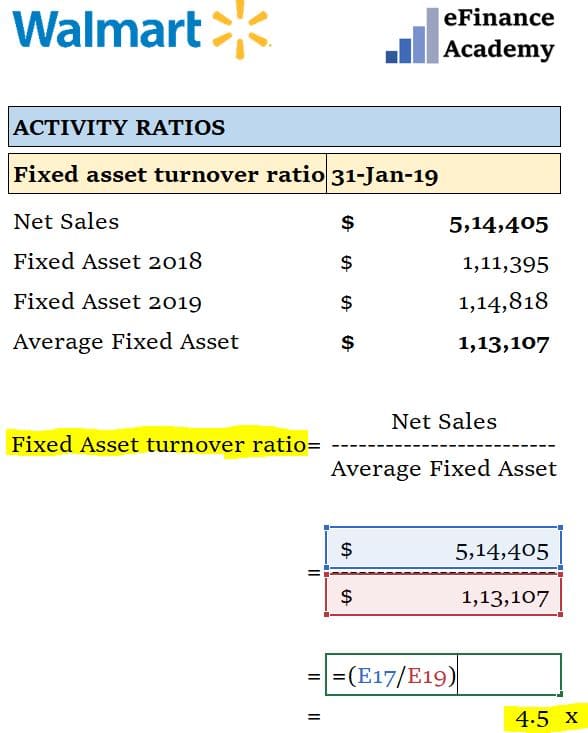 On a standalone basis, the ratio of 4.5 times may not give a clear picture unless we compare it with other companies in the same industry.

We need to perform trend analysis to see how the ratio has moved historically.

As we have already understood, the Fixed Asset turnover ratio indicates if the company is efficient using its Fixed Assets.

To understand any financial ratios in-depth. trend analysis has to be performed.

Let’s look at how the ratio as moved historically in the case of Facebook. 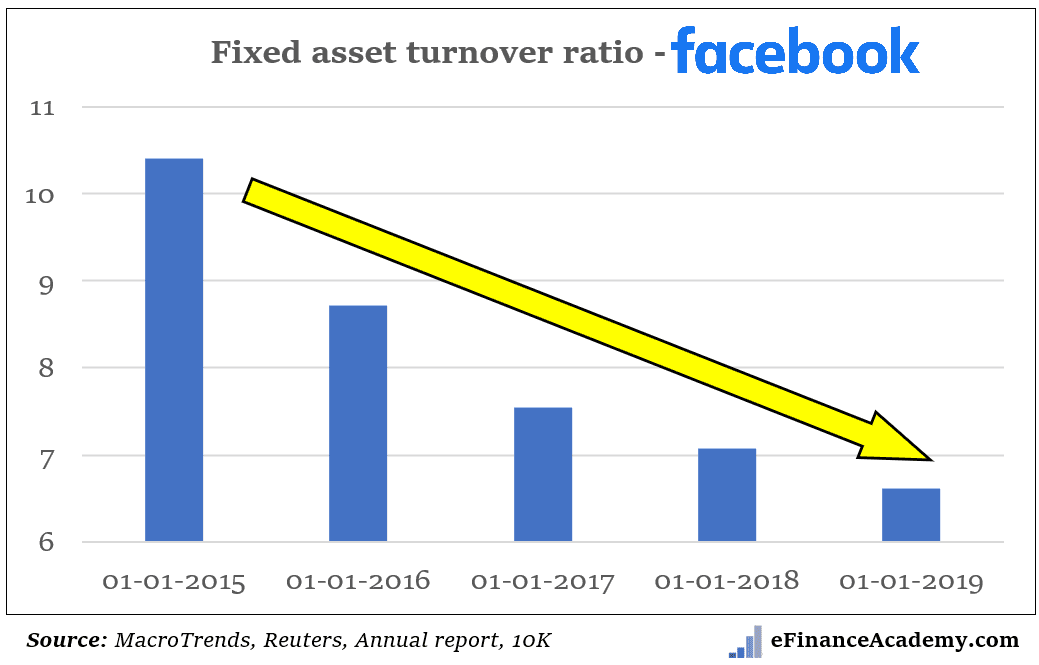 As evident from the chart above, the ratio for Facebook has been decreasing gradually for the past few years.

Although Facebook is not an asset-heavy company, its turnover ratio has fallen.

This means that with each dollar of Fixed Assets, the company is able to generate only $2.9.

To understand the industry dynamics, let us also look at how the asset turnover ratio for companies in different sectors is. 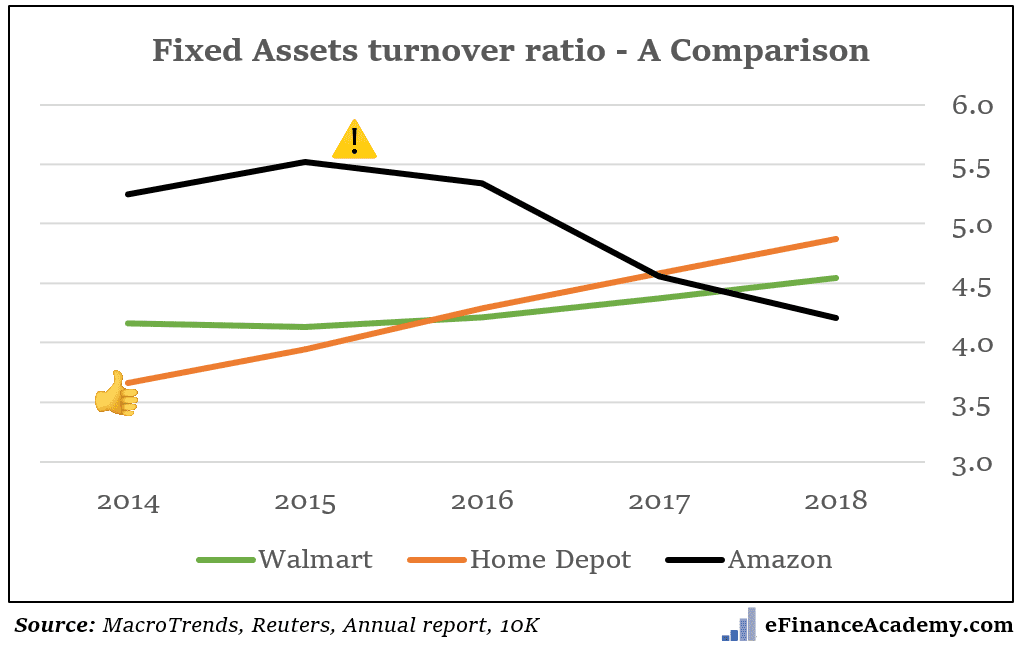 The ratio profile for companies in the retail sector is almost in the same range.

Being in the retail sector, companies like Walmart and Home Depot need to manage their Fixed Assets in the most efficient manner.

In the case of Home Depot – a home improvement retailer ( supplies tools, construction products, and various similar services), you can observe that the turnover ratio is increasing for the past 5 years.

Hence, the turnover ratio for both companies is in the range of 4 to 5 times.

In the case of Amazon, the ratio has been falling since 2015. This shows some difficulty in managing the Fixed Assets efficiently.

Currently, Amazon Fixed asset turnover ratio is 4.2 times. This is similar to other companies like Home Depot or Walmart. 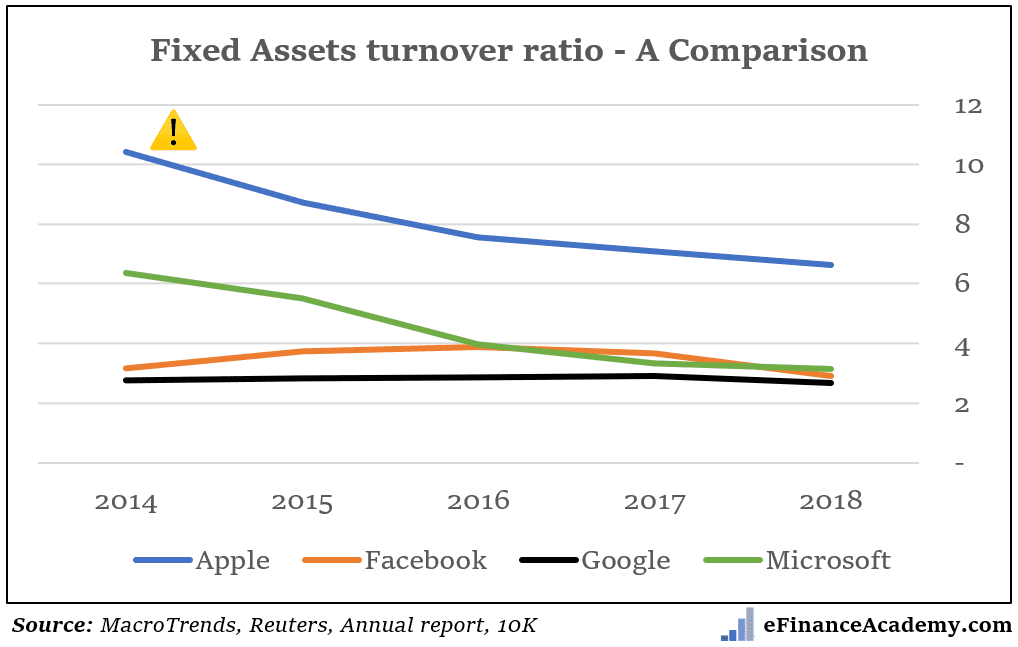 When you calculate the ratio for tech-based companies like Apple, Facebook, Google (Alphabet) and Microsoft, you will observe that the ratios are in lower single digits.

In the case of Apple, the ratio has been falling since 2014 which is not a good indication.

The company’s revenue is not increasing significantly while its Fixed Asset base is gradually increasing. Hence, the turnover ratio in the case of Apple has fallen from 11 times to 6 times in the past 5 years.

The ratio was as high as 11 times. But, currently, Apple Fixed Asset turnover ratio is 6.6 times.

As already discussed as part of Trend Analysis, the turnover ratio for Facebook is falling.

Although, not an asset-heavy company, yet Facebook is unable to manage its Fixed Asset base efficiently.

Similar to Apple, even Microsoft company is unable to manage its Fixed Assets efficiently.

Such a fall in the ratio is clear indication of inefficient management of Fixed Assets to generate Revenue.

In the case of Google, there has been no improvement in the ratio for the past 5 years. It is in the same range of 2.5 to 3 times.