What is interest coverage ratio?

Interest Coverage Ratio (ICR) being an income statement ratio, indicates if the company has earned sufficient earnings so that it can make interest payments on the borrowings.

An interest coverage ratio explains a company’s ability to earn profits to make interest payments on its borrowings.

Hence this ratio will be relevant only in the case of the companies having borrowings as part of their business.

Often used as a covenant, lenders rely heavily on this ratio as it helps lenders in evaluating if the companies are making profits to cover the interest expenses.

Hence, companies with borrowings on the balance sheet focus constantly on maintaining a high coverage ratio. 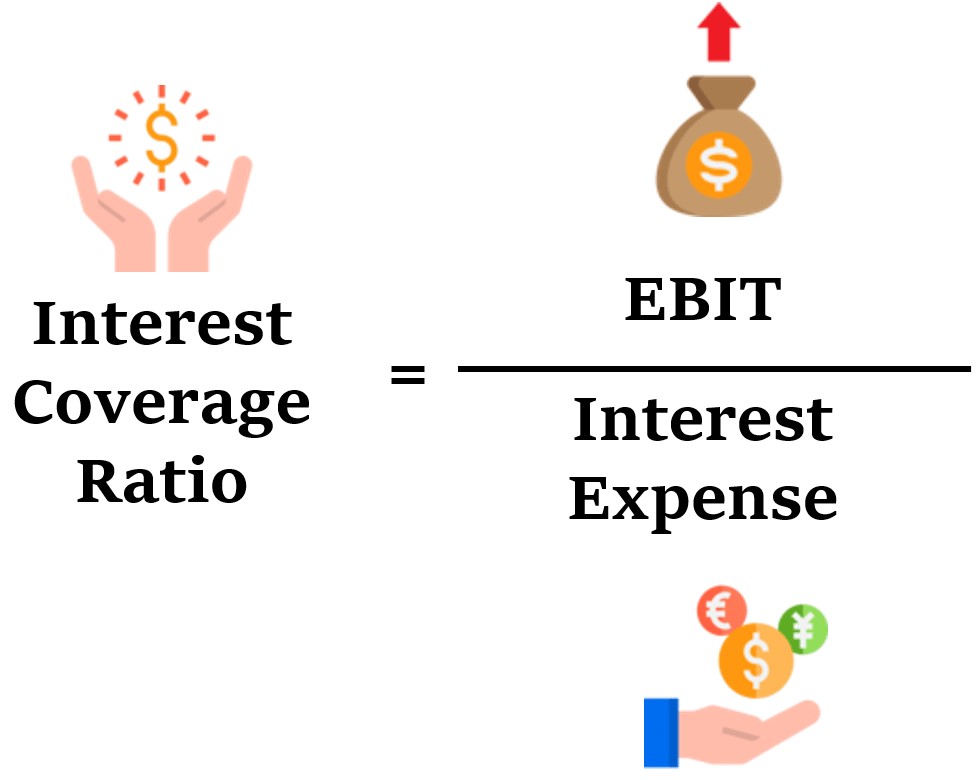 The formula for the ICR is simple.

It can be calculated taking values from Income Statement.

We take EBIT in the numerator and interest expense in the denominator.

EBIT stands for Earnings before interest and taxes.

Interest expense is the money paid by the company to the lenders on borrowings.

Sometimes, earnings before interest, taxes and depreciation and amortization (EBITDA) is also used in the numerator (we will discuss in our examples later)

Let us understand the formula with a hypothetical example taking two companies.

Both Company A and Company B has

Also, below is the profitability profile for both the companies. 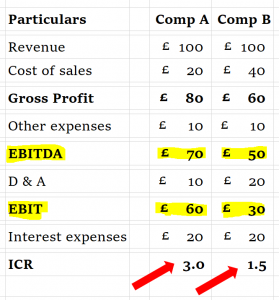 Although both the companies have the same borrowings and interest rate profiles, their EBIT profile differs.

Let us calculate the interest coverage ratio for both the companies using EBIT in this example.

We will use the below-given interest coverage ratio formula.

What this means is that Company A was able to generate profit which is twice the interest expenses.

Generally higher the profits in terms of interest expense, better it is.

Let us move on to the next example.

Alternatively, we can calculate the interest coverage ratio with slight modification i,e. instead of taking EBIT in the numerator we may use EBITDA ( Earnings before interest, taxes and depreciation and amortization) in the numerator.

The main reason why EBITDA may be considered instead of EBIT is that with EBITDA the earnings are not influenced by non-cash expenses such as depreciation and amortization expenses.

Now, let us look at the profitability profile for both the companies once again.

But, in this interest coverage ratio example, we will calculate using EBITDA in the numerator instead of EBIT. 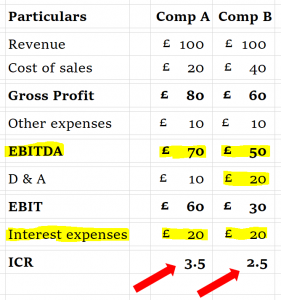 Since we are taking EBITDA, non-cash expenses such as depreciation and amortization will not be included.

This results in better earnings metric in the numerator.

Dividing 70 million by 20 million we get interest coverage ratio of 3.5 x

Dividing 50 million by 20 million we get interest coverage ratio of 2.5 x

This is because depreciation and amortization expense in the case of company B is 20 million ( almost double of Company A) which lead to lower EBIT.

Hence, ICR must be calculated using EBITDA if the company is having significantly high depreciation and amortization expense. Else, generally, analysts uses EBIT in the numerator.

In our example 3, let us calculate the interest coverage ratio for Walmart Inc using excel. 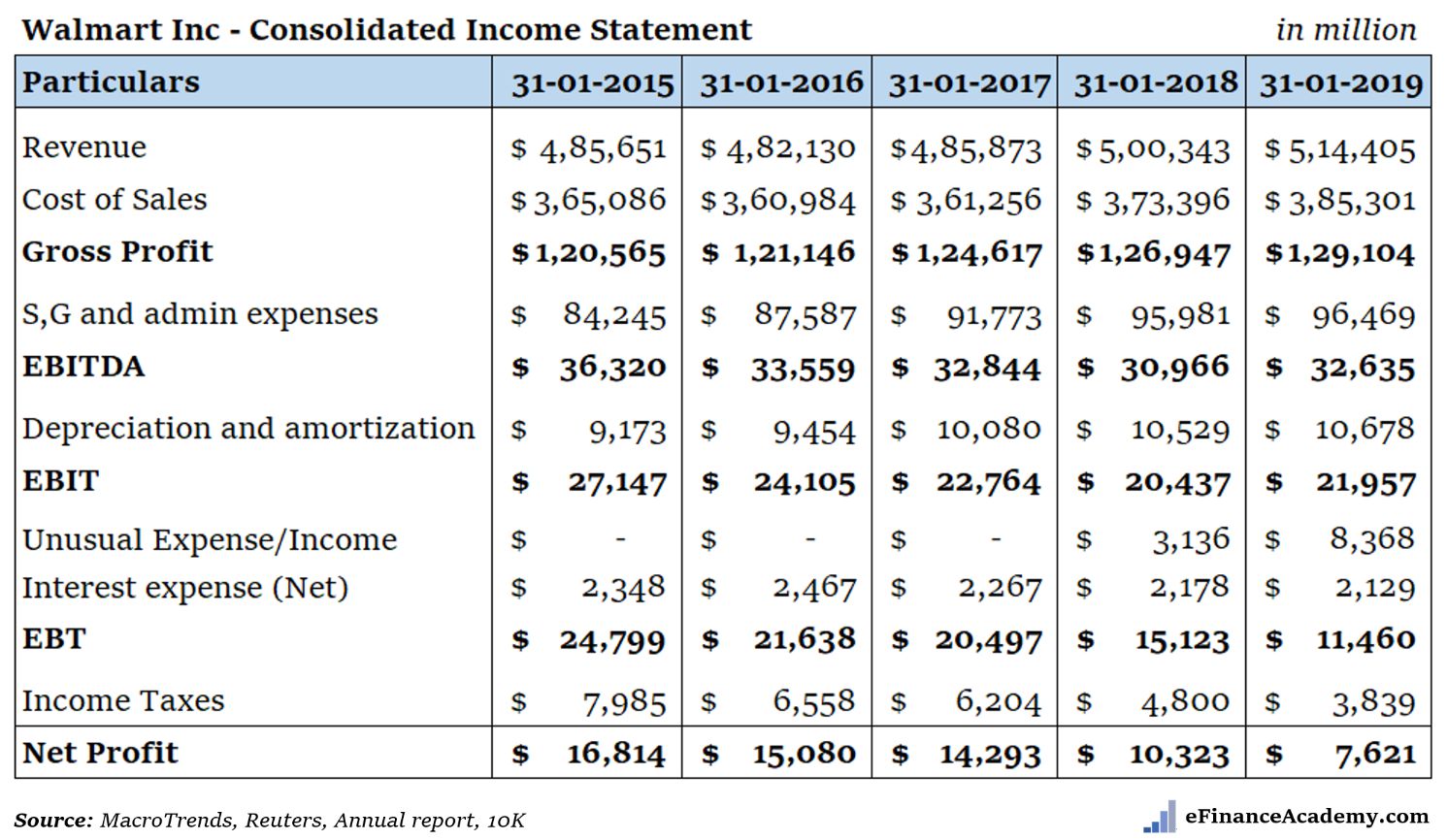 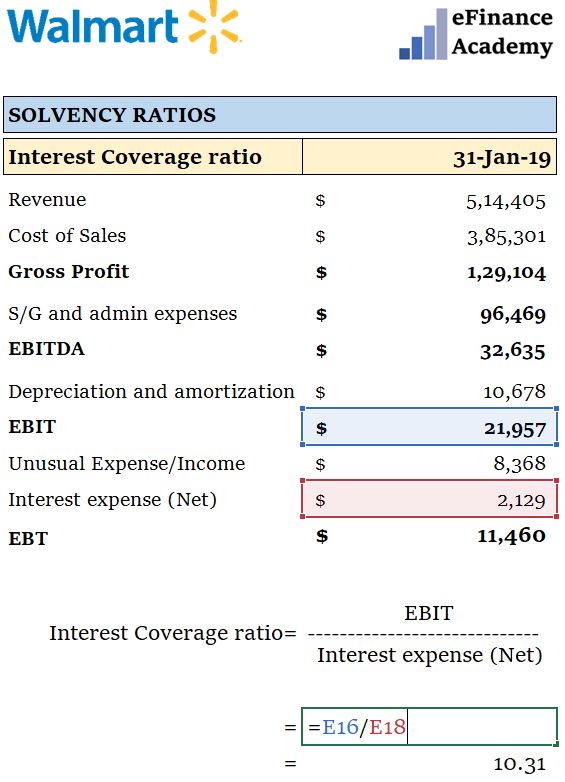 In the same way, we can calculate ICR for Walmart for different years so that we can analyze the ratio in depth.

Any financial ratios will not give a clear picture when analyzed on a stand-alone basis. Hence trend analysis has to be performed for a particular ratio.

Let us look at how ICR has moved historically in the case of Walmart.

As you can see, ICR in the case of Amazon has increased significantly.

This indicates that the company was able to meet its interest expense quite easily.

Such an increase in interest coverage ratio would be possible either by increasing the EBIT or by reducing the interest burden.

In the case of Amazon, the company was able to generate a great amount of profits which easily helped it to meet its interest expense.

Hence, a thorough trend analysis of a financial ratio helps in understanding the company better.

It is also important to compare the Interest coverage ratio of the company with other similar companies in the same industry.

This helps in understanding if how is the company performing when compared to other competitor or industry as a whole. 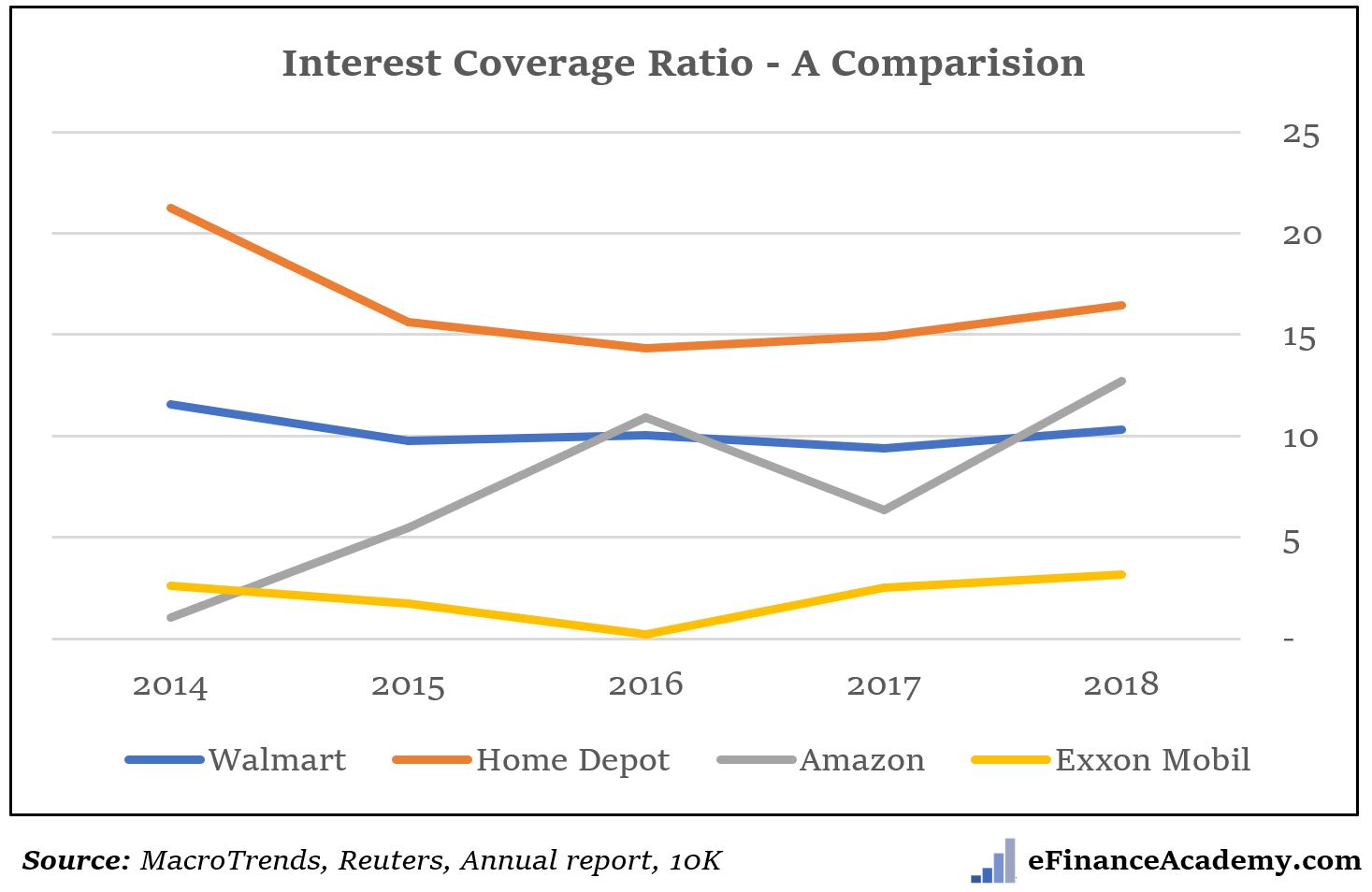 Home Depot has higher ICR than compared with companies like Walmart.

But the ratio has been falling since 2015.

This is because the company raised money through borrowings which increased interest expense while the earnings did not increase sufficiently.

Nonetheless, having such a high ICR is generally considered positive.

Amazon Inc is into e-commerce, cloud computing, digital streaming, and artificial intelligence and other similar business.

It is very interesting to note how Amazon has turned around amazingly.

But, gradually the company was able to generate significant profits which increased ICR to 13 x. (See chart ! )

They typically raise money through borrowings. Hence they have to bear interest expenses as part of their operations.

In this case, as well, ExxonMobil is able to earn only moderate profits so as to make interest payments. We can see that ICR for this company is in the range of 1 x to 2 x.

Generally, ICR of 1 x to 2 x is viewed cautiously. Because, if the profitability of the company deteriorates further, it may have to default on its interest payment which may lead to further woes.

Although, not part of the chart shown above, tech companies like Facebook, Google ( Alphabet) and Microsoft do not have significant borrowings on their balance sheet.

In such cases, there will not be any interest expense burden on them. Accordingly, ICR for such companies will be nil or irrelevant.

Below are a few important aspects one must consider while analyzing any company using the interest overage ratio.

How to improve the interest coverage ratio?

There are various ways to increase ICR. Let us look at few of them.

High borrowings on the balance sheet will be a drag to profitability because of interest expense.

If feasible, companies must re-pay their borrowings gradually which reduces interest burden in the future.

Another ideal way to decrease ICR is to have control on interest expense.

This can be achieved by negotiating competitive interest rates from the lenders.

Often lower interest rates are enjoyed only by companies with sufficient credibility in the market.

Try to increase profits either by having strict control over the cost of production or by increasing sales price.

The appropriate strategy has to be deployed depending upon the market sentiments to achieve higher profits. This will invariably make ICR higher.

Scroll through below recommended resources or learn other important solvency ratios.