What is Inventory turnover ratio?

As part of Financial Ratio analysis, Activity ratios predominantly indicate the efficiency of the company in managing its resources.

Inventory turnover ratio is one of the most important activity ratio that is more relevant in the case of manufacturing companies.

Similar to other activity ratios, even this ratio indicates how efficient is the company in generating revenue by utilizing its resources.

Inventory turnover ratio or stock turnover ratio basically indicates the number of times inventory was turned over or sold during a period (generally a year).

In a more simple sense, it shows how many times the stock of the company was sold during the year.

Let us look at the formula to understand the ratio better. 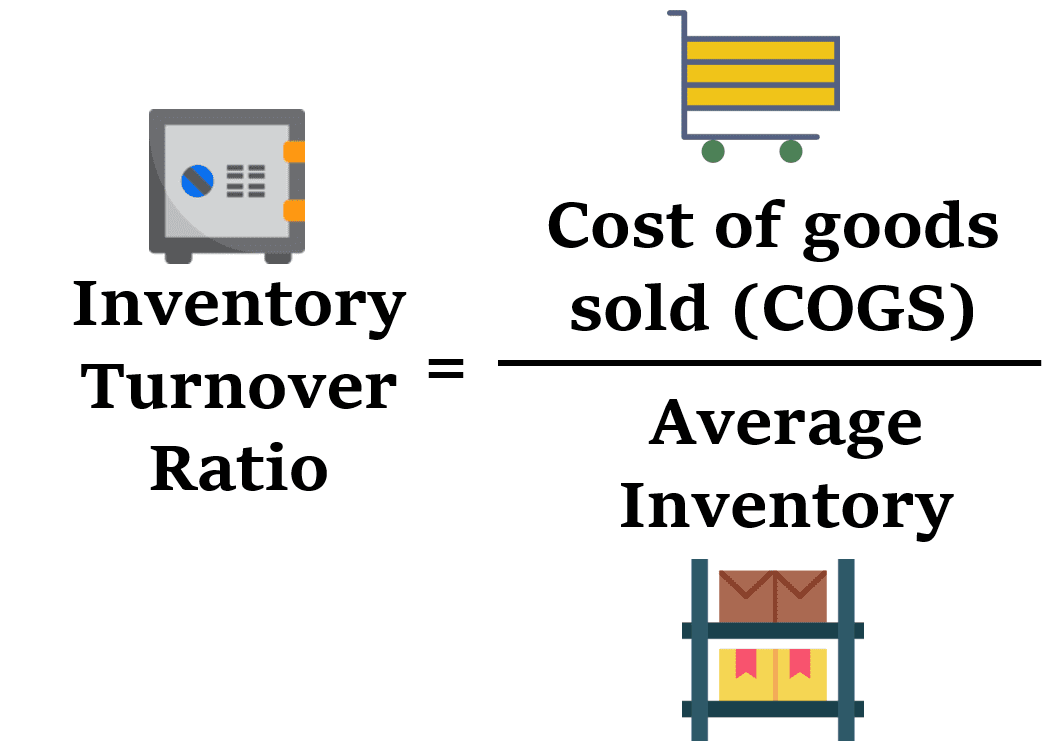 We take the Cost of goods sold in the numerator and Average Inventory in the denominator.

To understand the formula better, let us consider few examples.

We take Company A and Company B for calculating ITR.

The values given in the example below are in $ millions. 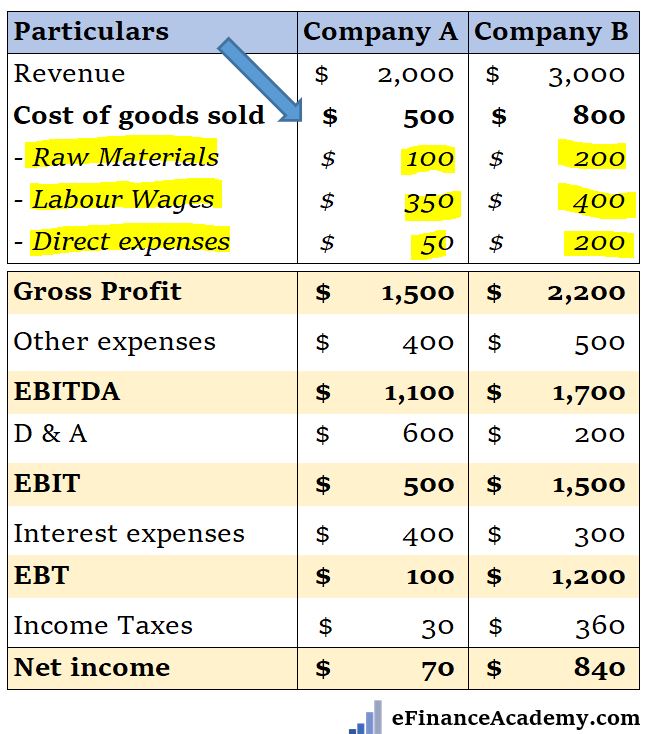 But first, let us calculate COGS for both the companies.

Now, to calculate the Average Inventory for both the companies, consider the below-given Balance Sheet. 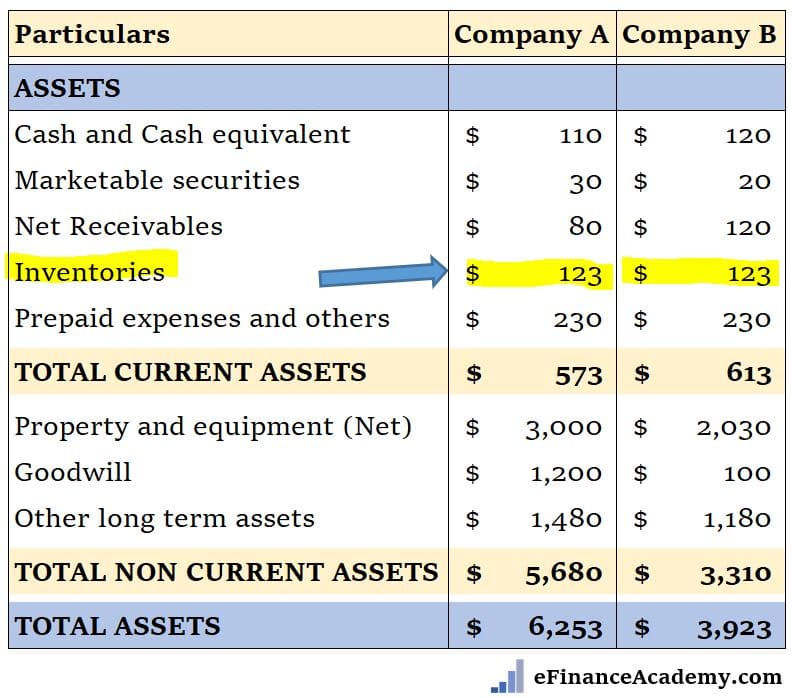 In the above example, we are given only single period data.

Hence closing Inventory balance can only be considered as Average Inventory.

ITR on a standalone basis, will not give any picture.

Hence, it has to be compared with the industry benchmark to make better conclusions.

Now, let us calculate the stock turnover ratio for Walmart using excel as part of the practical application of ratios.

You can download the Inventory turnover ratio template for Walmart using the below option. 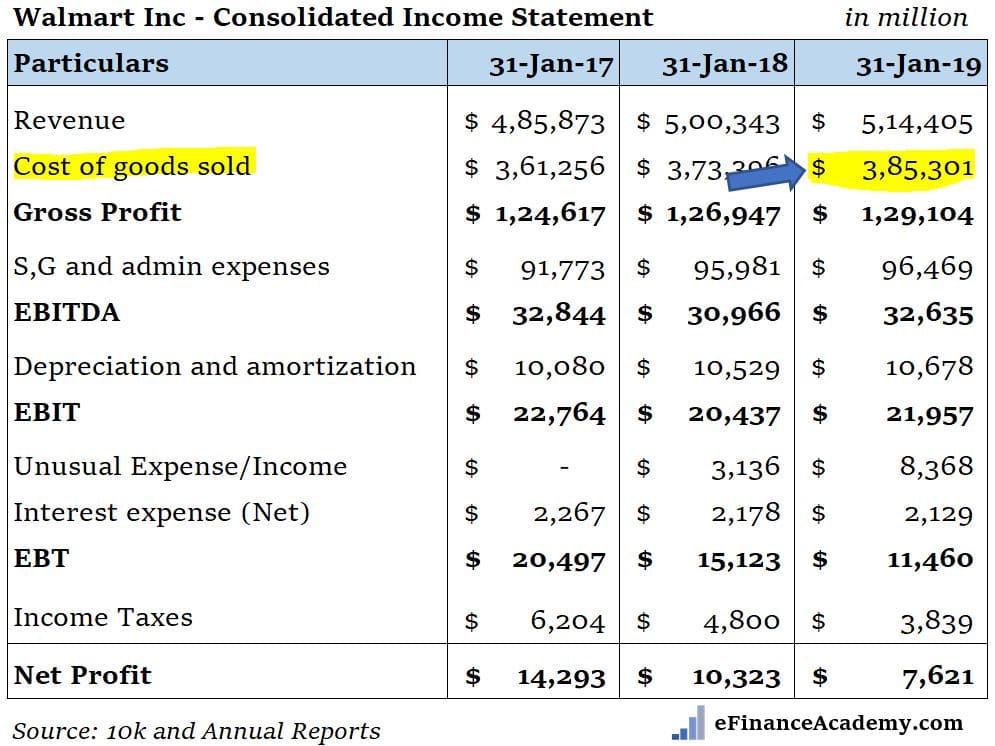 In the case of Walmart, COGS can be easily calculated from the Income Statement. 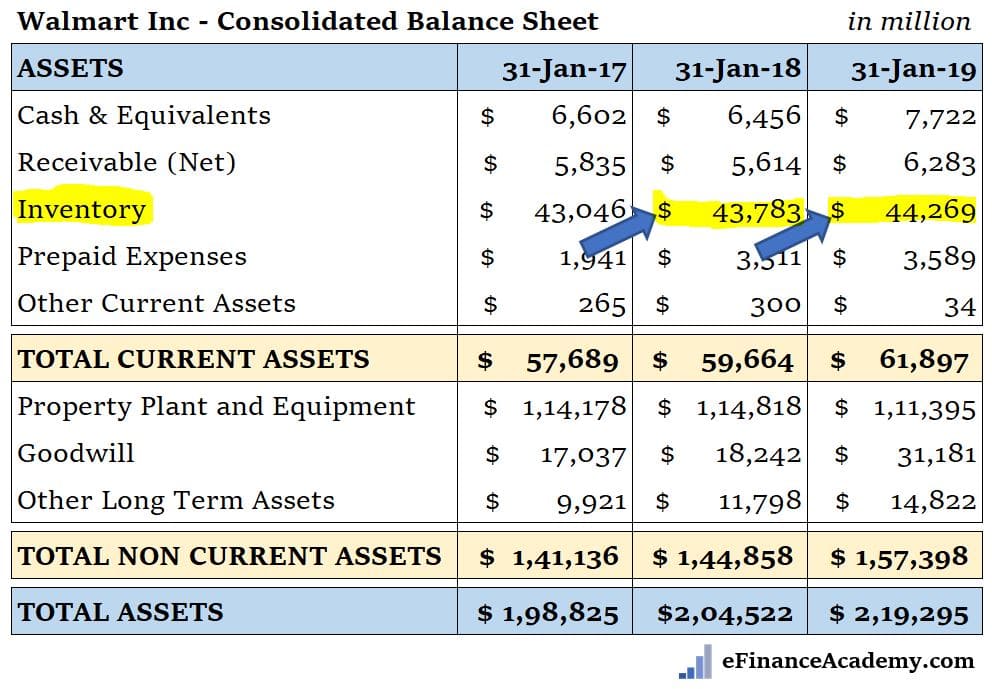 Now that we know all the values, let us calculate the Stock turnover ratio for Walmart 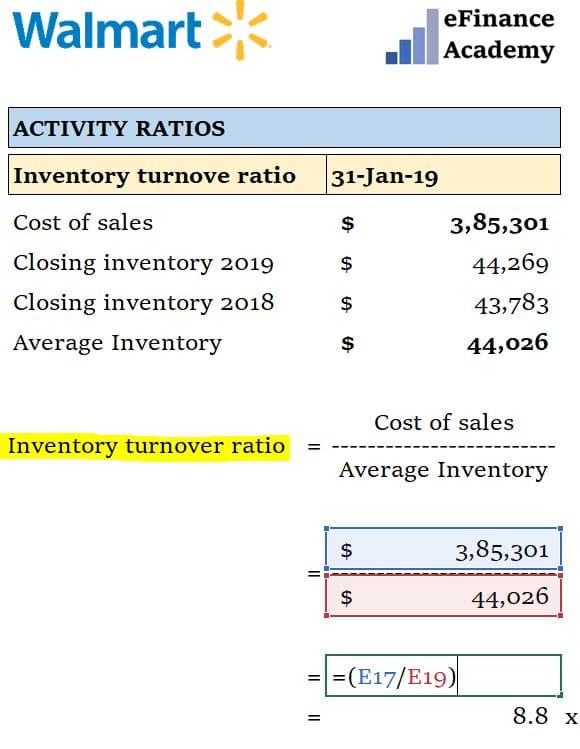 As evident, Walmart has a high inventory turnover ratio of 8.9 times.

What this means is that Walmart is able to turn its inventory almost 9 times during the year.

A better conclusion can be drawn only when the ratio is compared with other similar companies in the same sector.

Any financial ratios will not give a clear picture when analyzed on a standalone basis.

Hence trend analysis has to be performed for a particular ratio.

This helps in understanding about the sustainability of the performance in the future.

Let us look at how the turnover ratio for Microsoft has moved historically. 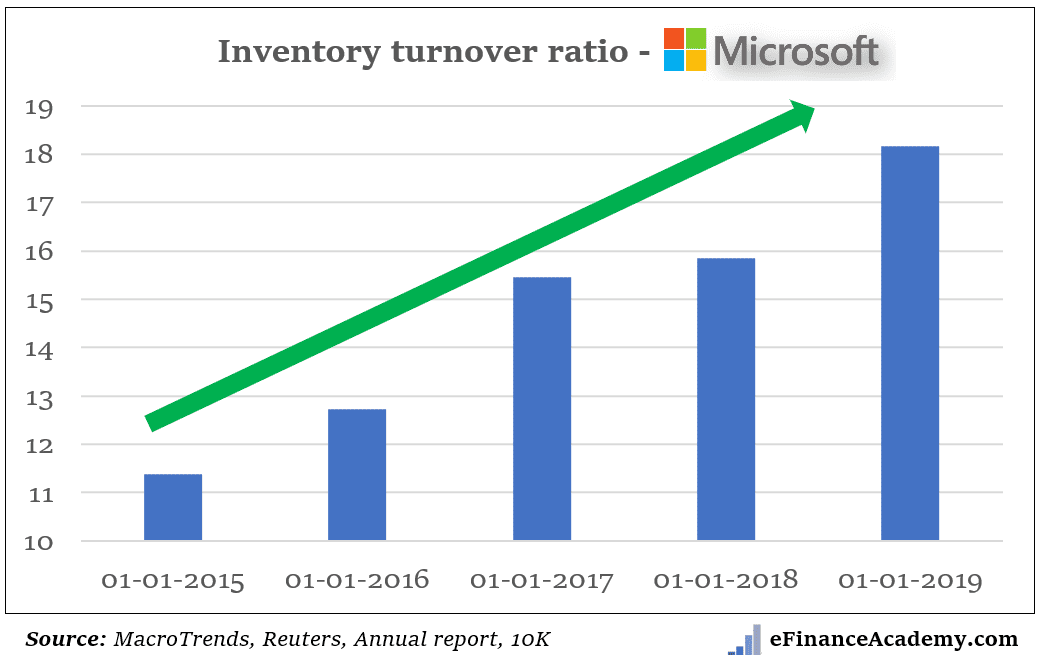 As evident, ITR in the case of Microsoft has been increasing significantly.

Although not an inventory driven company, Microsoft was more efficient in managing its inventory.

The inventory turnover ratio increased gradually from 11x to the current 18x.

This increase indicates that the company was able to clear the inventory more frequently.

This, in turn, helped the company in increasing its overall liquidity position.

As mentioned earlier, to analyze any financial ratio better, a particular ratio should also be compared with other companies in the same sector.

Further, it is important to understand why the ratio is different from other non-similar sectors.

All such above exercise provides greater insight into the cross-sectional industry dynamics. 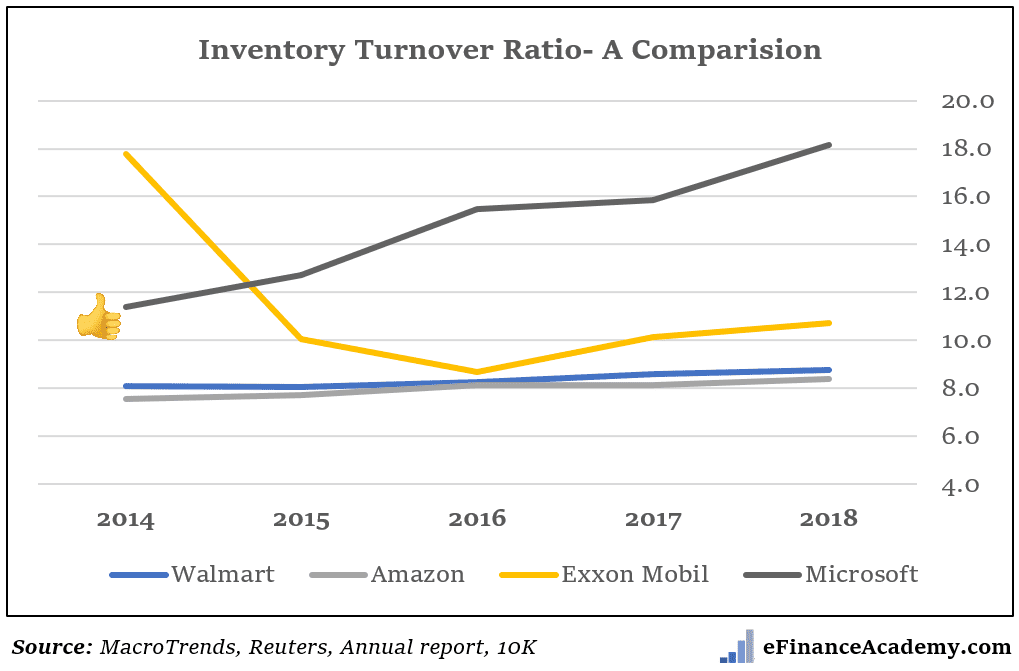 In the case of Walmart (which runs a chain of hypermarkets, discount department stores,
and grocery stores), you can observe that the inventory turnover ratio is very low.

As required by the business model, companies like Walmart generally maintains a huge stock of inventory.

Compared to other companies, the Inventory turnover ratio for Walmart is at moderate 8 times.

Similarly, Amazon also needs to maintain a very high inventory as part of its business model.

Hence the inventory turnover ratio for Amazon is 8 times.

Both companies are not able to increase their ITR for the past 5 years.

Nonetheless, they are able to maintain a steady-state inventory turnover ratio of 8 times.

Exxon Mobil is a US-based multinational oil and gas company.

As part of their business model, they ideally maintain reserves of crude and similar other resources.

Since 2014, the average inventory for ExxonMobil has increased significantly.

This has lead to the fall in ITR. Hence, the inventory turnover ratio for ExxonMobil is 11x.

As already highlighted as part of trend analysis, Microsoft company was able to manage its inventory in a more efficient manner.

This has helped the company to increase its ITR from as low as 11x to 18x.

As already highlighted, ITR is more relevant and useful for manufacturing companies than service-based companies.

At times company may have both manufacturing and service-based operations.

If the ratio is calculated using the company-wide COGS and Average Inventory, it will not give a true picture.