What is Payable turnover ratio ?

As part of financial ratio analysis, activity ratios play an important role. These ratios help in understanding the efficiency at which the company utilizes the resources.

Similarly, another important activity ratio is the Payable turnover ratio.

Let us understand about this turnover ratio in-depth.

The amount payable to such vendors is called as Accounts Payable.

Now, the Payable turnover ratio basically indicates the frequency at which the company makes payment to its Account Payable.

It helps in understanding if the company makes the payment to vendors too often or it generally lags the payment due to such vendors.

Hence, understanding the this turnover ratio helps in assessing the overall liquidity position of the company as well. 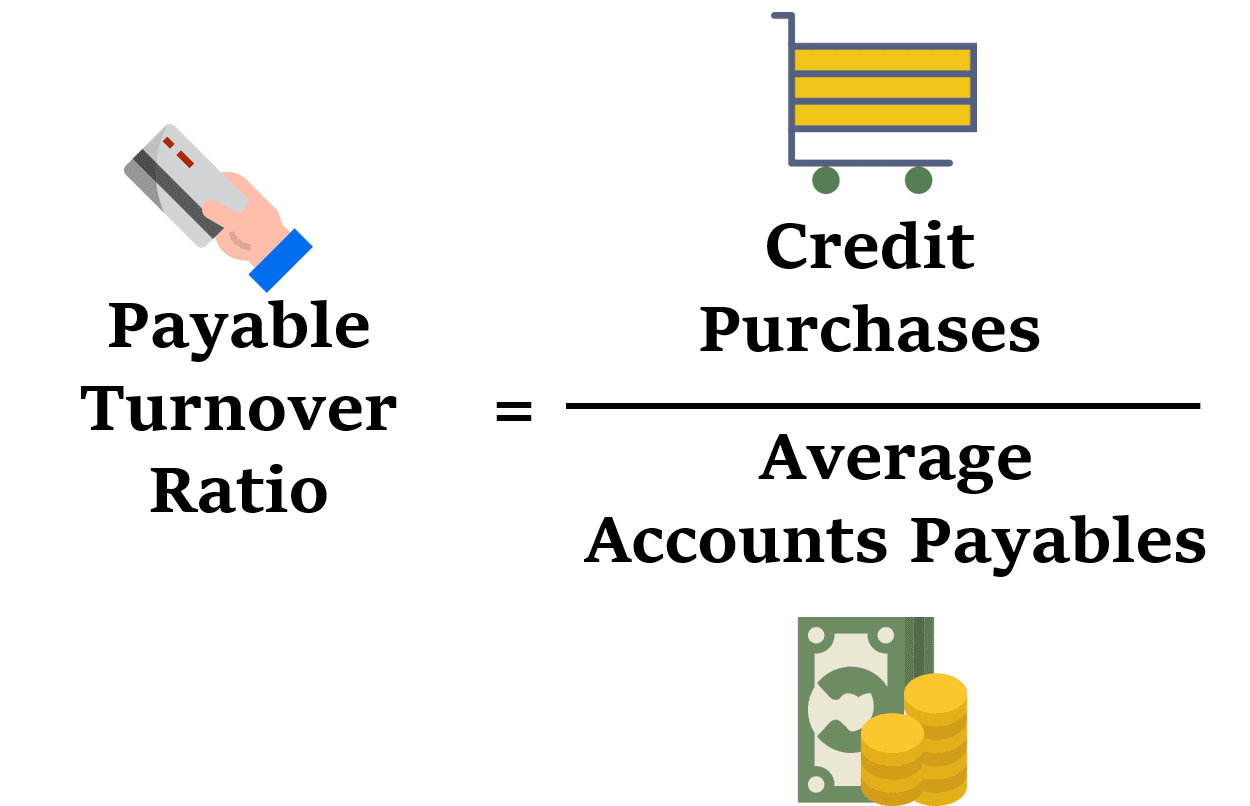 The formula for the payable turnover ratio is quite logical.

We take Credit Purchases in the numerator and Average accounts payable in the denominator.

Credit purchase refers to the purchase made by the company from various vendors in which payment for such purchases are not made in cash immediately, but after some period.

Now, such amount outstanding towards the vendors is recorded in the Balance Sheet as Accounts Payable.

Hence, Average Accounts Payable is nothing but a simple average of Accounts payable balance as at current period-end and previous-period end.

Below are the important aspects which are relevant while calculating numerator and denominator.

Let us calculate the ratio using a hypothetical example

We take Company A and Company B for calculating PTR. 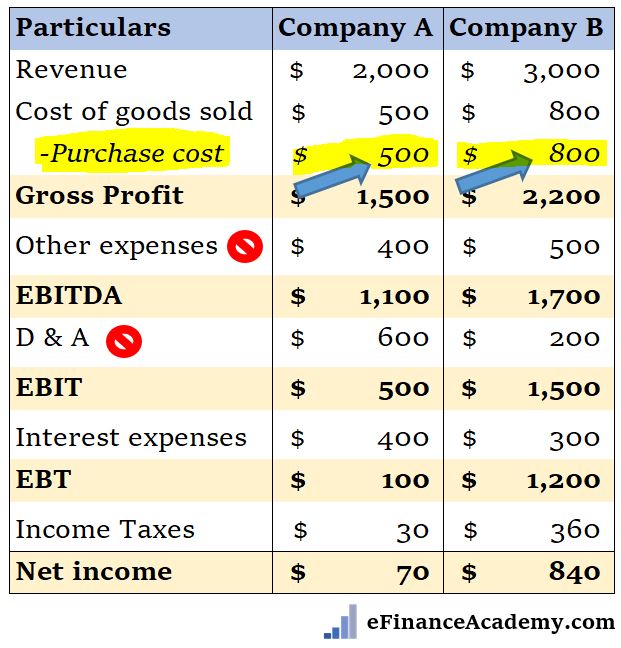 It is important to note that only credit purchases need to be considered and not total purchases.

Because in the case of cash purchase, the company will always make the payment for the goods or services it receives. Hence, the question of Accounts Payable balance does not arise.

Credit Purchase value for both the companies can be obtained from the income statement.

Now, let us also take a look at total assets for both the companies. 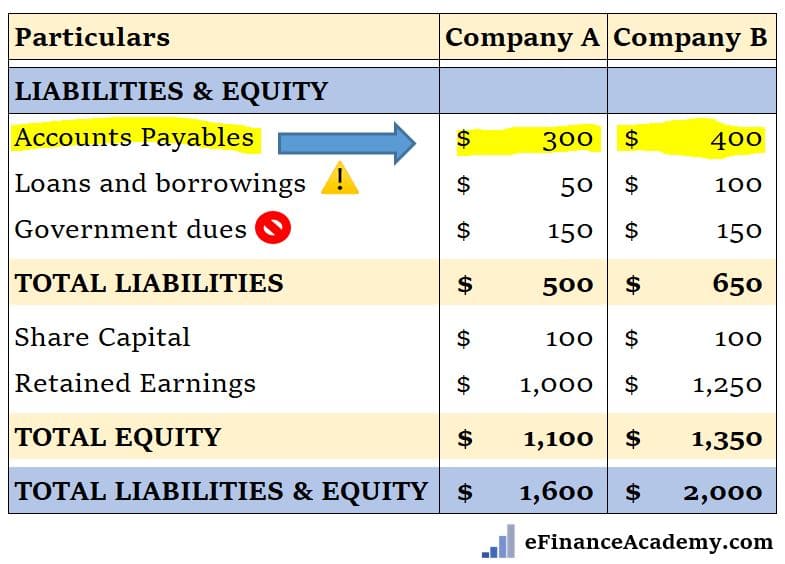 Average Accounts payable for both the companies can be obtained from the current liability section of the Balance Sheet.

Also, we should not take a mere closing balance of Accounts Payable.

Instead, an average of the past 2 year-end balance has to be taken.

But, in our example, we are given only one-period data.

Hence, given Accounts Payable balance will only be Average Accounts payable.

What this means is that Company A pays its Average Accounts Payable only 1.6 times during a year.

On the contrary, Company B pays its Average Accounts Payable twice a year.

Keeping other things constant, compared to Company  B, Company A is more efficient since it makes the payment less frequently.

In our next example, let us calculate the Payable turnover ratio using excel.

You can download the turnover ratio template using below option. 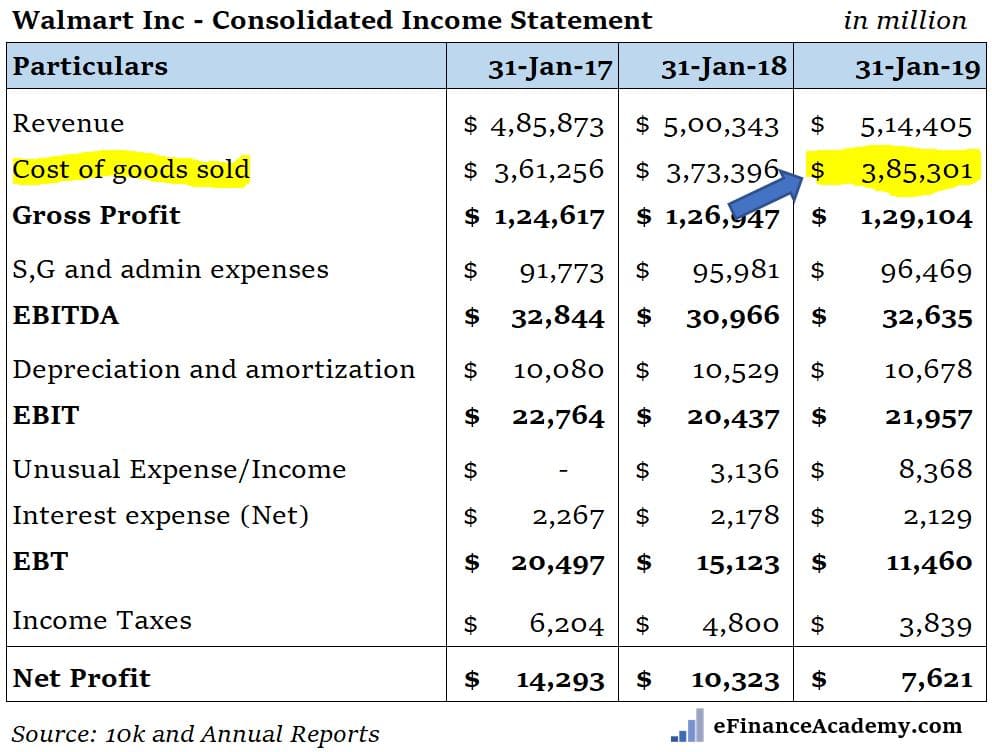 In the case of public companies, it is generally difficult to segregate Credit Purchases from the cost of goods sold since the figure is not directly reported in the Income Statement.

Hence, for the sake of convenience, analysts generally use the Cost of Sales or  Cost of Goods Sold(COGS) as a proxy for Credit Purchases 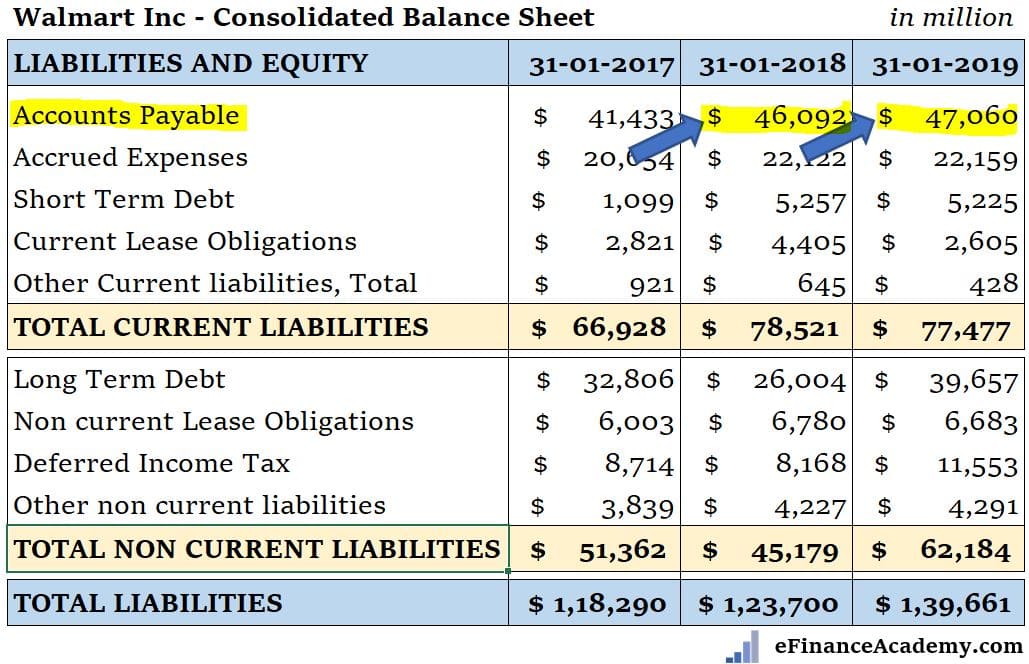 Now that we know all the values, let us calculate the PTR for Walmart. 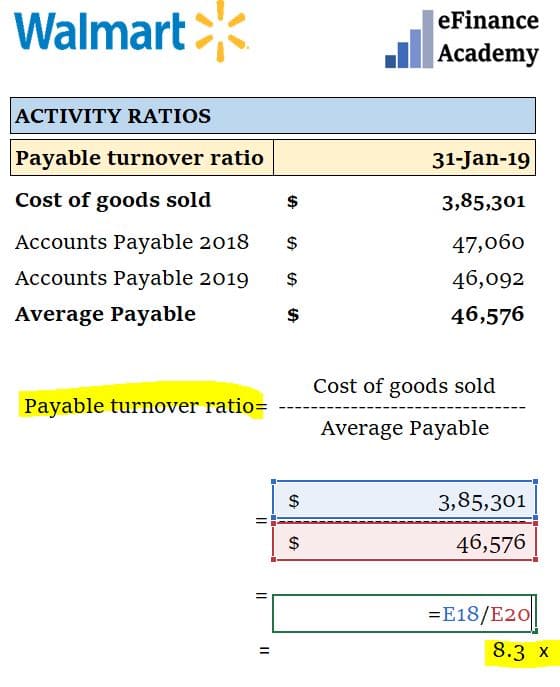 As clearly evident, Payable turnover ratio for Walmart is 8.3 times.

What this means is that Walmart pays its Average Account Payable balance around 8 times during a year.

Now whether the ratio is good or bad depends upon the fact that how is the company’s performance relative to the industry standard.

As we have already understood, PTR indicates how frequently the company makes payment towards its account payables.

As already highlighted, any financial ratios will not give any clear picture when analyzed on a standalone basis.

How the ratio has more historically has to be analyzed.  This is performed as part of Trend Analysis.

Let us look at how PTR has moved historically in case of Facebook- The Social Media Gaint. 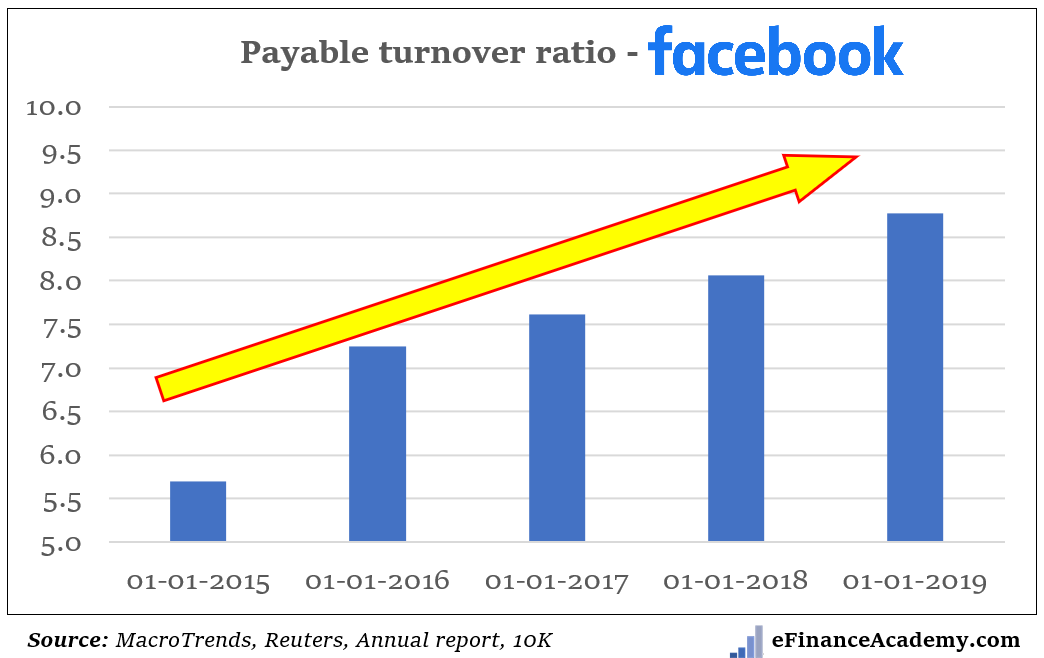 As evident, the Payable turnover ratio for Facebook is  8.7 times.

This indicates that the company makes the payment towards its Accounts Payable almost 9 times a year.

While the company’s cost of sales increased, its Accounts Payable balance did not increase at the same place. Hence, the ratio for Facebook started increasing.

So, performing trend analysis helps in identifying any unusual pattern. Depending upon the importance of that particular ratio, analysts perform even more in-depth analysis.

Similar to trend analysis, it is also important to understand the ratio profile of various companies under different sectors as well.

This helps in understanding the cross-sectional industry dynamics. 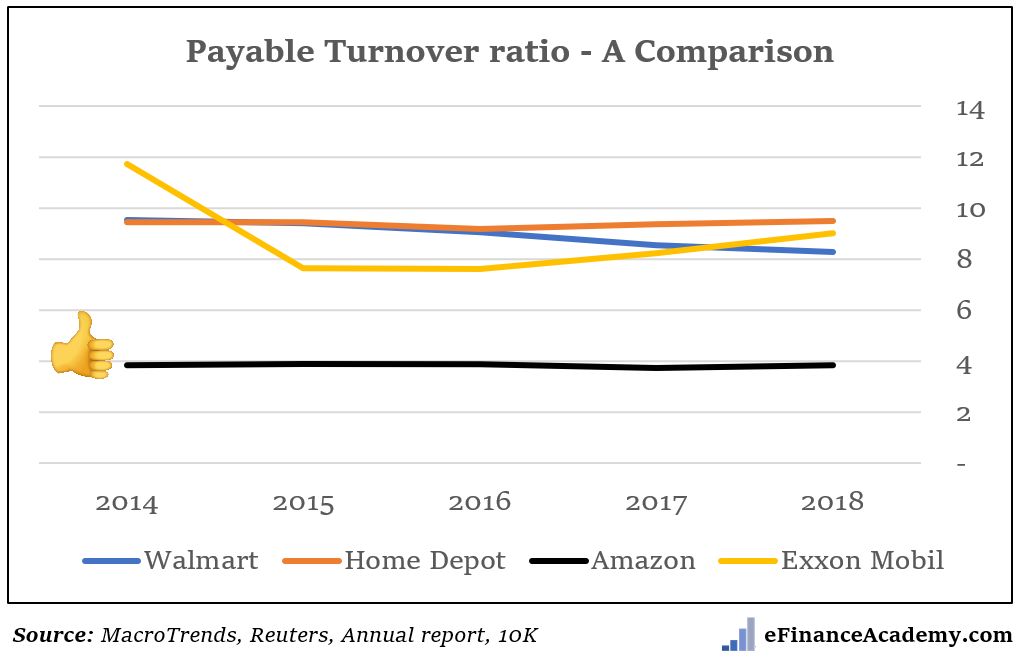 As you can see companies in the retail sector like Walmart and Home Depot have a Payable Turnover ratio which is in the range of 8 to 10 times.

This indicates that the vendor from whom these companies make purchases typically provide a similar credit period.

Hence, the ratio for both the company are almost similar for the past 5 years.

Amazon Inc is into e-commerce, cloud computing, digital streaming, and artificial  intelligence and other similar business.

Compared to Walmart or Home Depot, Amazon has a relatively lower turnover ratio.

Also, it is very interesting to note that the payable turnover ratio for Amazon has been stagnant for past 5 years in the range of 3.6 times to 3.8 times.

This indicates the efforts of the company in managing its Accounts Payables.

This, in turn, helps the company in boosting its liquidity position.

ExxonMobil is a US-based multinational oil and gas company.

The payable turnover ratio for ExxonMobil is 9 times.

The growth of Account Payable balance outpaced the growth of the cost of goods sold. Hence there is was a decrease in PTR. 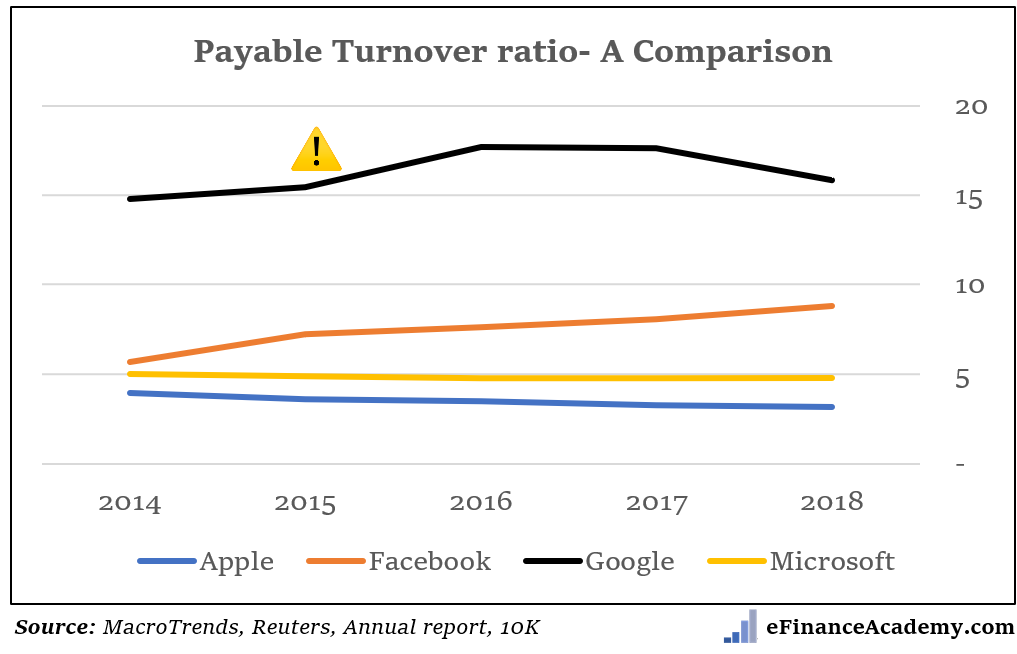 When you calculate the ratio for tech-based companies like Apple, Facebook, Google (Alphabet) and Microsoft, you will observe that the ratio varies from company to company.

The Payable turnover ratio for Apple is 3 times.

The company is able to maintain this steady-state ratio for past 5 years.

This shows the ability of the company in managing its Account Payable more efficiently.

As already highlighted as part of Trend Analysis, the payable turnover ratio for Facebook is 8.7 times.

The ratio was as low as 5.7 times but subsequently it increased gradually to current 8.7 x.

This indicates that the company was making the payment towards accounts payable more frequently.

Similar to Apple, even Microsoft was able to maintain a steady turnover ratio.

Interestingly, the Payable turnover ratio for Google is 15.8 times.

This is relatively high among other tech-based companies.

The company maintains a very moderate Accounts Payable balance compared to its Cost of Sales.

Hence, the ratio for Google is relatively high.

Below are few important aspects one must consider while analyzing any company using Payable turnover ratio.

As already highlighted, depending upon the availability of information analysts generally use COGS as a proxy to credit purchase in the numerator.