What is the Pretax Profit margin ratio?

Pretax Profit margin or Profit before Tax margin is a profitability ratio that helps in understanding the company performance for a given period.

Unlike Gross Profit margin ratio, that considers only Direct expenses or Cost of Sales, this ratio is arrived after considering all expenses except Taxes.

As part of the business operation, companies that earn profit to pay a certain amount towards the Government as Taxes. Each country or region will have its own tax legislation governing the levy and collection of Taxes.

Companies operating in different countries may have different tax treatment for the Profits.

Hence, the tax expenses may also varies from company to company.

Now, Pretax Profit margin basically means how much profit is the company making on each dollar of sales but BEFORE paying any taxes.

Hence, it is called a Pretax Profit margin or Profit before Tax margin.

As the Pretax profit margin is not influenced by tax expenses,  investors and lenders generally use the PBT margin to compare companies in different tax jurisdictions. 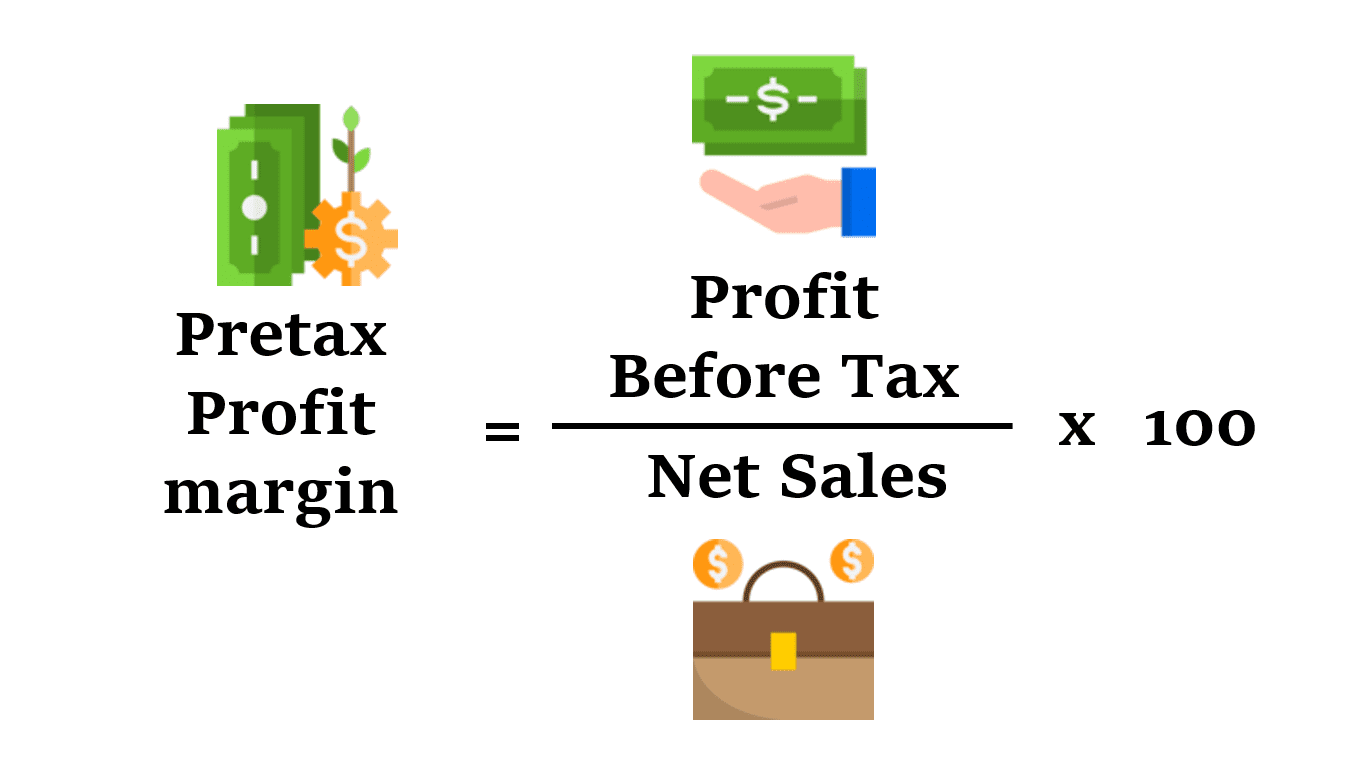 The Pretax profit margin formula is as easy as it can be.

We take Pretax Profit or PBT in the numerator and Net Sales in the denominator and multiply with 100.

Pretax Profit can be calculated after reducing all the expenses from the sales except the Tax expenses.

Below given is the typical Income Statement that shows how Pretax profit is arrived. 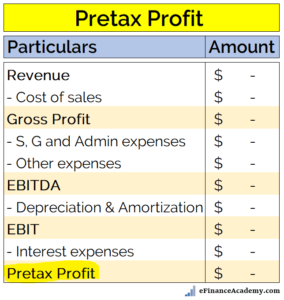 Let us understand the Pretax Profit with a hypothetical example. 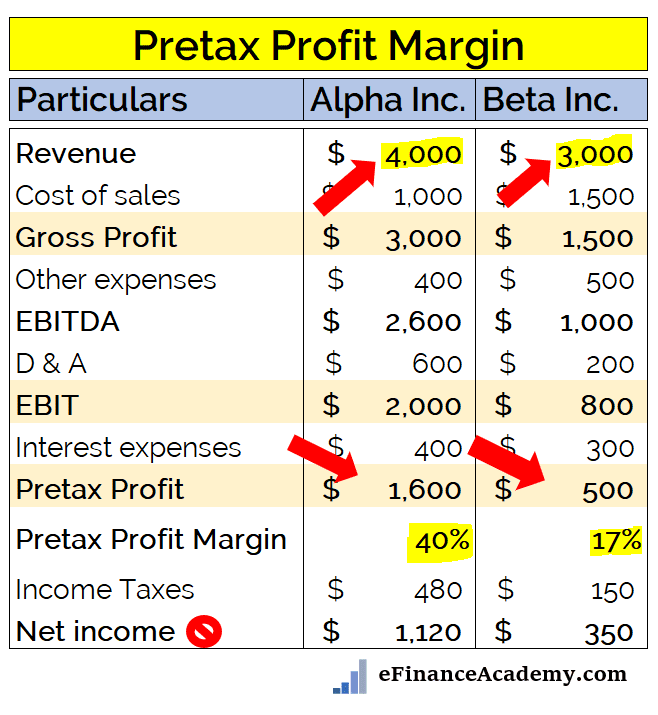 Let us find both the values and calculate the ratio.

After reducing all the expenses from Sales except the Tax expenses, we get below values (Refer Income Statement above)

Now we are in a position to use the above values and calculate the PBT margin for both the companies.

As evident from the calculation above, Alpha Inc. has a PBT margin of 40%.

What this means is on each dollar of Sales, Company makes $0.4 worth of Pretax Profit.

Now, the company needs to meet its tax expenses from this profit.

Compared to both the companies and keeping all other factors constant, we can conclude that the performance of Alpha Inc. is better than that of Beta Inc.

But, the conclusion should not be drawn solely on the Pretax Profit margin.

Both the companies may have different tax profiles which can subsequently make the Net Profit margin ratio totally different.

Hence, generally, analysts compare the Pretax margin and Net Profit margin to understand how well is the company place in terms of tax treatment. This analysis helps them in making a better decision than concluding solely on the PBT ratio.

Let us now look at how to calculate the PBT margin using Excel.

In this resource, we have considered the Financial Statement of Walmart for the sake of explanation.

You can download the Pretax Profit margin template from Marketplace.

Once you download the file and open you will see the Consolidated Income Statement of Walmart. 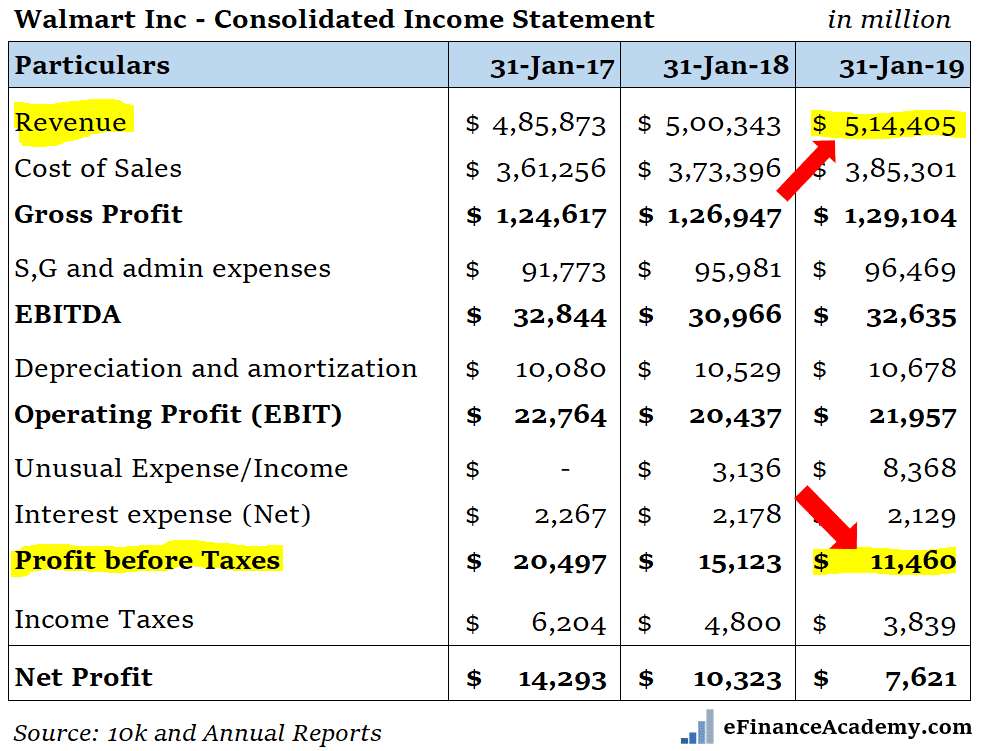 To calculate the PBT margin, we require

Both values can be obtained from the Income Statement directly.

After reducing all the Expenses (except the Taxes) from Sales, we get the Pretax Profit of $11,460

Now that we both the numerator and denominator we can quickly calculate the PBT ratio. 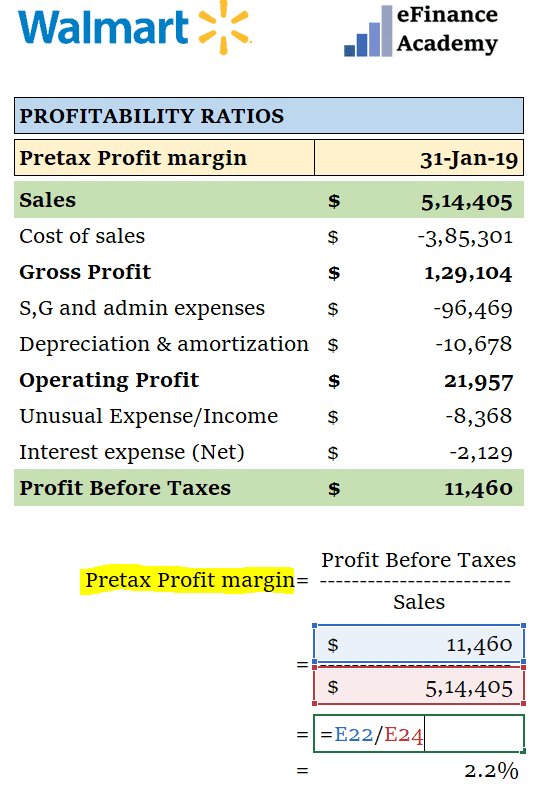 As evident from the calculation above, Walmart as a Pretax Profit margin of only 2%.

What this indicates is for Sales of $100, Walmart generates only $2 of Pretax Profit.

Further, the company needs to meet its Tax expenses out of this.

Although the PBT margin may appear low, the conclusion should be drawn only after comparing the margin with the other companies and also the Industry Benchmark.

In the next section, let us look at how to interpret the PBT margin.

As already discussed, the Pretax margin basically shows how much Profit does the Company generates from its sales before meeting its tax expenses.

To perform the Financial Analysis in a better way, one must cross-compare each Profitability ratio and try to build a relationship among one another.

The formula for Operating profit margin is as given below. 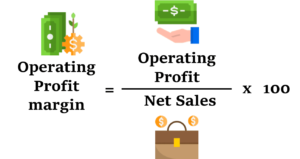 Similarly, the formula for the Pretax Profit margin is as given below. 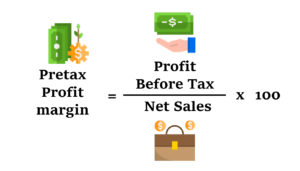 Between, Operating Profit and Pretax Profit, we have Interest Expenses. (Refer this Income Statement)

Hence, managing Interest Expense will help in translating the EBIT margin into the Pretax Profit margin.

Below we consider the Profitability profile for Facebook to understand how both the ratios have moved. 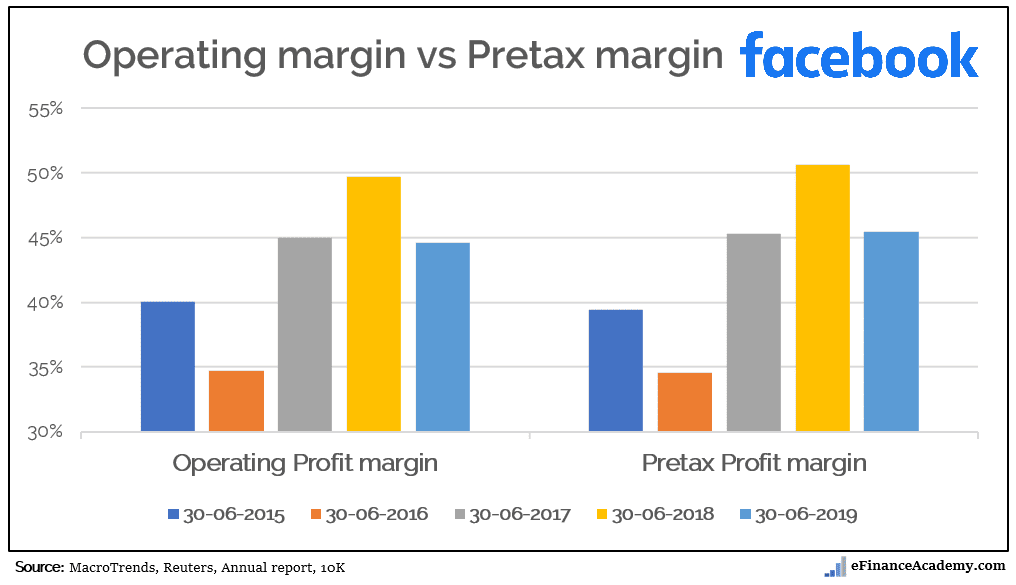 What this indicates is that the company does not have significant Interest expenses.

Hence, the company is able to translate its EBIT margin into the Pretax margin.

The comparison should be made between various Profitability ratios from the Income Statement and analyze the moment from top-line to bottom-line.

This helps in understanding how well is the company in terms of achieving higher profitability.

To determine if a Pretax Profit margin is good or bad, instead of concluding on a standalone basis, it is preferred to perform a Peer comparison i.e, the ratio needs to be compared with other companies in a similar sector.

Also, if feasible, one must look at how different is the ratio when compared to other Large-Cap companies. This will help in understanding the cross-sectional Industry dynamics.

Let us look at the PBT ratios for companies in the Retail sector like Walmart, Home Depot and Amazon. 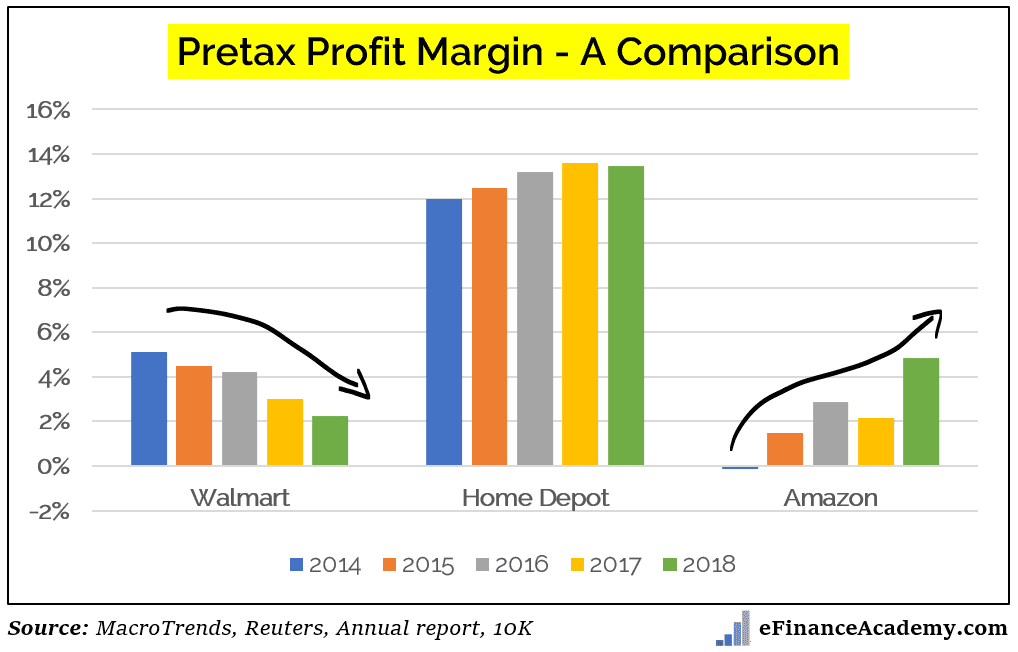 As part of the example above, we have already calculated the PBT margin for Walmart.

Now, as we compare the ratio with previous years, we can see that the profitability profile for the company is deteriorating.

The ratio, back in 2014 was 5%.  Although the company’s Revenue is increasing, there is a similar increase in Expenses as well.

Hence the company is unable to maintain its profitability.

Currently, for the year ending 31st December 2018, Walmart Pretax Profit margin is as low as 2%.

This was 3% of the previous period.

But as we look at Home Depot, the situation is different.

Not only the company has a high PTB margin compared to Walmart, but also it is able to gradually increase the same.

Over the past few years, Company’s was able to expand its PBT margin by almost 100 basis points.

Amazon is into e-commerce, cloud computing, digital streaming, and artificial intelligence and other similar business.

Until 2014, the company was suffering losses at a Pretax Profit level.

Subsequently, due to a change in the product mix and an increase in the pricing power, the company was able to expand its Gross Profit margin substantially.

Further, by managing its other expenses, the company was able to translate its improvement in the GP margin into the PBT margin.

Back in 2014, the company had a negative pretax margin.

Over the period the company has turnaround itself wonderfully such that for the year ending 31st December 2018, Amazon Pretax Profit margin is almost 5%. 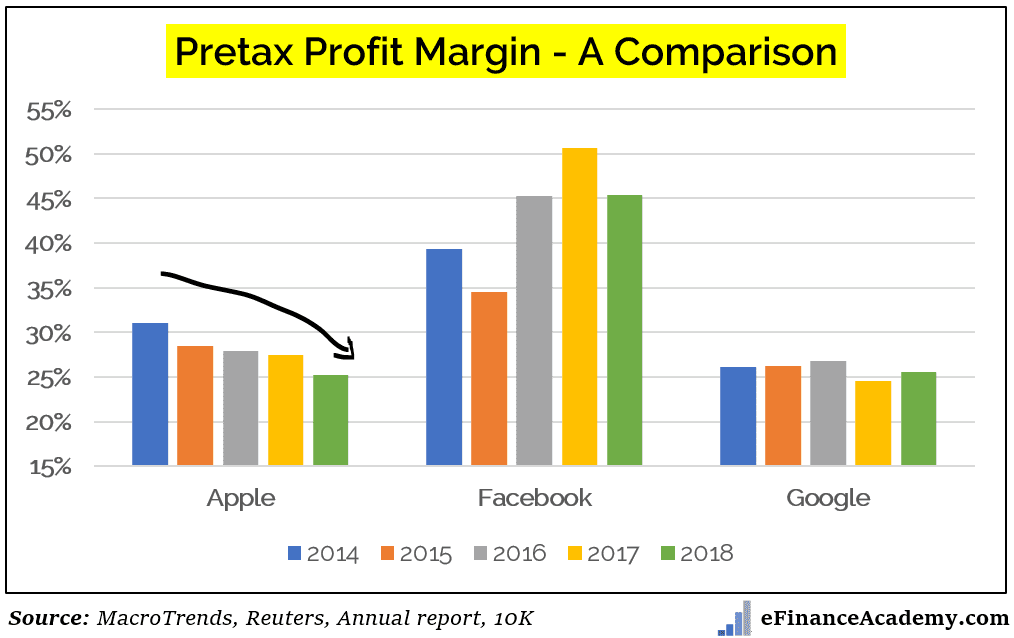 Now, let us also quickly look at the margin profile of other prominent tech-based companies.

As part of this research let us analyze Apple, Facebook, and Google.

Unlike companies in the Retail sector, tech-based companies generally have a higher Pretax margin. This is simply an advantage of operating in this segment.

When will look at the profitability profile for Apple, the PBT ratio has been falling consistently for the past few years.

Currently, for the year ending 31st December 2018,  Apple Pretax margin is 25% compared to 27% for the previous period

When compared with other tech-based companies, Facebook clearly has a higher Pretax margin.

As discussed as part of the Gross profit margin ratio,  Facebook makes a whopping 80% Gross Profit on its Revenues.

After factoring in the Interest expenses & other relevant expenses, Facebook still manages to achieve a Pretax margin of almost 40% to 50%.

For the year ending 31st December 2018, Facebook Pretax margin is 45% as compared to 51% for the previous period.

Similar to Apple, even Microsoft company is not able to increase its Pretax Profit margins.

GP margin for Microsoft is stagnant in the range of 65%.

Although the company’s revenues are increasing, the company is not able to optimize its product mix so as to generate higher Pretax Profits.

Compared to Facebook, Google has a low PBT margin.